We are very sorry to tell that Chris Bowler died on 18th May, 2014. One of the founders of Monstrous Regiment women’s theatre company she had earlier been active in many of the small-scale experimental companies that were part of the creative ferment around Oval House in the late 60s and early 70s. She toured with Welfare State and performed with Rational Theatre among other companies. In 1990 she became director of Hoxton Hall in East London, helping secure the building’s future. For Hilary Westlake’s obituary in The Guardian see here. 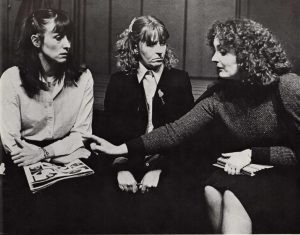