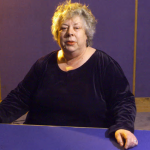 Annie Castledine died on 4th June 2016 in the Home she was in in Eastbourne. Many people were affected by Annie’s life and work, perhaps especially the women directors she inspired and mentored. Anna Furse writes: I was deeply touched by Annie’s life and work. If it weren’t for Annie I would never have got to direct…. She took me under her wing in 1989, long story. She was like so many women of her generation, struggling against so many prejudices and refusals. Annie was a larger than life woman in every way. She knocked down many walls and egos, demolished hypocrisy, and voiced her imagination in an amazing colloquial poetry. I loved the woman. But she never hurt me. And I think she would want to be remembered for her real being. So it would also be wrong to romanticise all of her qualities. For she could also be a monster as all who love her will say!’ 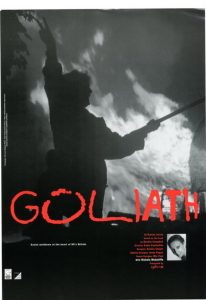 Born in Rotherham, South Yorks, Annie began her career as a lecturer in Theatre Studies at Bulmershe College before training as a director under the Arts Council trainee scheme in 1979 at the Theatre Royal York. There she set up her own small-scale company Northern Studio Theatre dedicated to developing new writing in the North. She went on to run Theatre Clwyd and the Derby Playhouse where she introduced many women playwrights including Gerlind Reinshagen’s Sunday’s Children and Mary Pix’s The Innocent Mistress. She later co-directed many key productions, working with Stephen Daldry at the Gate Theatre on Marieluise Fleisser’s plays and also worked with Annabel Arden, Simon McBurney and Neil Bartlett. Additionally she directed two acclaimed shows for Sphinx which toured hugely successfully:  Goliath by Bryony Lavery adapted from Beatrix Campbell’s book, starring Nichola McAuliffe, co-produced by Northern Stage, transferring to a sellout run at the Bush Theatre, and A Wedding Story by Bryony Lavery, co-produced by Birmingham Rep, transferring to Soho Theatre.  She also directed And All The Children Cried by Judith Jones and Beatrix Campbell at West Yorkshire Playhouse which transferred to New End, London. See The Guardian for full obituary.