See The Guardian for full obituary

It was my good luck to join the same company, Key Perspectives, as Bill Mitchell in the late seventies. I soon saw that Bill Mitchell was a great learner and an even greater teacher. He taught by doing. I’d written a script to tour Fenland village halls and community centres, and set in the same locations. Knowing it was undoable I’d written a final scene where the back wall of the village hall cracks open and a ghost floats in amidst mists and blinding light. I watched Bill’s eyes brighten for a moment and then become thoughtful. I read this as “Idiot! Does he think we’re on RSC budgets?” Three weeks of rehearsal later and night after night across the Fens that back wall cracked, sending a shiver through audiences. Bill had done it, and we all learned to raise ourselves to his creative level. In an interview Bill reflected that Perspectives was where he stopped being the quiet guy serving the design needs of others to being the enthusiastic talker, the great listener, the great teacher and artist we have now lost. 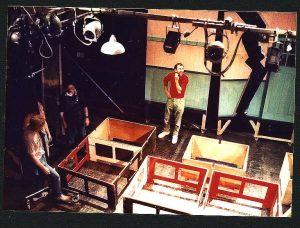 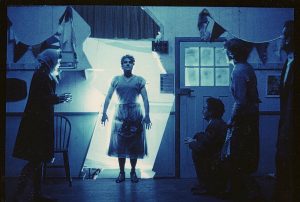 The Devil on the Heath by Tony Coult
Perspectives at the Half Moon Alie Street, 1981

“Typically, the devising company for this worked with young people in schools to co-create
these shows, drawing on craft and story-telling work that went on to form the basis for
characters and narratives. By 1978 the company was unique in having two staff designers –
Annie Smart, later to work with the Royal Court Theatre and Berkeley Repertory
Theater, and Bill Mitchell, later to work with Theatre Centre and Kneehigh, and to
found Wildworks. Both cite the work of Welfare State as early and enduring influences. The
significance of this two-designer set-up is that it placed visual art rooted in the community
institutions of schools and playgroups at the heart of the creative process, and could thus
appear as close to a model of community arts as classic TiE.” (British Theatre Companies 1965-1979
by John Bull and contributors, Bloomsbury, 2017)