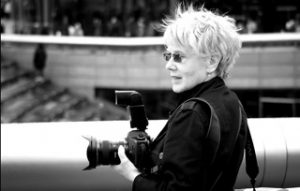 Sheila Burnett studied at Birmingham School of Art and came to London in the 1970s to work as an illustrator in Fleet Street. In 1974 she joined the Pip Simmons Theatre Group and toured as an actor for 12 years. During this time, she took many photos of the group and its touring activities, which led to a change of career. Sheila has now had over 25 years experience as a professional theatre photographer. Her work includes production and pre-production shots, site-specific and other projects related to the arts. She has a studio in Maida Vale which she uses for actors’ headshots and pre production shoots.

For more photos and information on the Pip Simmons Theatre Group: www.sheilaburnett-headshots.com/blog/

Sheila has an extensive archive of 80’s alternative theatre, including Women’s Theatre
and LGBT. If you would like more information on her archive and its contents please contact
Sheila via sheila@sheilaburnett.com.