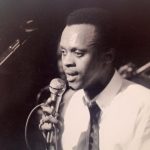 Tony as a young man

Tony Gouveia was Associate Director at Immediate Theatre, the vital Hackney-based company working on estates to create inclusive accessible theatre with communities generally excluded from the arts by cost and cultural barriers and with young people, dealing with complex issues in their lives, or with disabilities.  He joined Immediate in 2008 following a career that started in the West End in the cast of Jesus Christ Superstar. He also performed in  Mass Carib and in Kwame Dawes’ One Love for Talawa in 2001 among others. But most of his career was devoted to working with young people in the community and in Theatre-In-Education. His work encompassed a wealth of key companies across the sector, from the Bubble youth theatre, to Perspectives, from Nottingham-based Roundabout to Theatre Centre  to Half Moon YPT where he directed the 1990 community play After the Storm, and was one of the founders of L’Ouverture theatre company. He died in February 2017,