‘Unity Theatre was founded on 5 January 1936 by a general meeting of the Rebel Players and Red Radio, left-wing theatre groups derived from the Workers’ Theatre Movement. WTM had been founded in the 1920s under the influence of the artistic movements arising from the Russian Revolution. Unity began as Unity Theatre Club, an amateur theatre group as a way of avoiding censorship by the Lord Chamberlain.

A self-converted hall at Britannia Street was used from 1936 until 1937. In order to be able to expand their range of activities a new hall was converted in Goldington Street, which opened in November 1937. In 1938 Paul Robeson turned down several West End roles to appear in Plant in the Sun for free, as all Unity’s actors did at that time. From 1946 Unity also put on various touring shows by the Mobile group, including those featuring the Amazons, a women’s company.

Unity became a professional company in 1946 but reverted back to being an amateur group in 1947. At this time they also established other Unity groups in other UK cities including Glasgow and Merseyside. They staged the world premieres of plays by Sean O’Casey and Arthur Adamov and British premieres of plays by Jean-Paul Sartre, Maxim Gorky and Bertolt Brecht. They also specialised in traditional entertainment forms such as Music Hall shows. Unity’s theatre burnt down on 8 November 1975, putting a temporary end to activities.’ 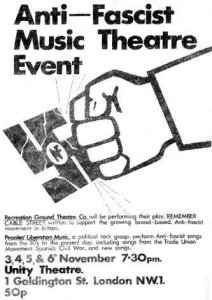 Many alternative theatre companies had associations with Unity Theatre. CAST Productions (see Roland Muldoon interview forthcoming) was created following disagreements over policy within Unity. Welfare State created an environment for the production, with CAST, of John Arden and Margaretta D’Arcy’s Harold Muggins is a Martyr in 1968.   The General Will, Recreation Ground and many others performed there.

After 1975 there was some disagreement whether to continue with Unity Theatre as a producing body or whether its role had been superceded by the alternative theatre movement. In the end Unity Theatre Trust was set up with proceeds from the insurance money from the fire.

Unity Liverpool continues as an active venue and producer of small-scale work.

A DVD including interviews with members of the company is available from Unity Theatre Trust.
Contact:  secretary@unitytheatre.org.uk