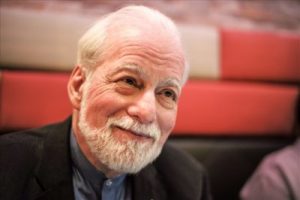 Edward David (ED) Berman was born 1941, in Lewiston, Maine and at the age of 15 won a scholarship to Harvard where he began to develop what later became the Inter-Action Games Method through volunteer work in depressed South Boston. He dropped out of college to do a Civil Rights tour of the South, but went on to become a Rhodes Scholar at Oxford. Seriously hurt while researching for his doctorate in Turkey and given a limited time to live, he went on to work as a play leader in Notting Hill, London developing street theatre and games to explore creativity and communication. In 1968 he set up Inter-Action, a multi-faceted and hugely influential organisation which became the basis of numerous theatre companies from Dogg’s Troupe and the Fun Art Bus to lunchtime theatre clubs, as well as Britain’s first City Farm, community media van, and the Weekend Arts College among many other initiatives. It commissioned the first purpose-built community arts centre, the Talacre Centre in Kentish Town. The company lived communally in shared housing trust accommodation. The original Inter-Action later split, with Interchange staying in Camden while Berman and Inter-Action moved first to the Royal Victoria Docks and later onboard the ship H.M.S. President where they developed training schemes for young people especially early computer training, along with models of social-enterprise aimed at a variety of community organisations. Berman’s influential work in this area led to his appointment in 1982 as non-party-political special advisor to Michael Heseltine on inner-city matters, following the recent riots, and later to work developing social enterprise models in South Africa, Russia and India. He was awarded an M.B.E. in 1979.  He is still doing work in India and is developing a new Fun Art Bus for 2012 (For more information: see Further ED Berman and view our Fun Art Bus video)

‘Well I used the Inter-Action creative game method with anybody, whether they were psychiatrists in training to kids with disabilities, adults with disabilities. I would run 3 or 4 sessions a week myself and then as I trained other people they would run 2, 3 or 4 sessions a week, so I went into remand homes and disabled clubs, really anybody, because this method can be used with anybody ‘cause it taps into games that we learn in childhood from peek-a-boo onwards to hide and seek and so on. There’s a whole development of these things and evolution of them that we all go through, probably in almost all cultures, certainly in all that I’ve looked at.’