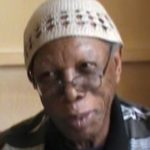 Jamal Ali (1940-) is a poet, playwright, and film writer born in Guyana, who led the Black Theatre of Brixton and worked with other alternative theatres. Christened Clifford Adolfus Agard, his mother Esther Agard Abrahams, was Christian, and his father, Charles Augustus Agard, was Muslim. Ali attended Anna Regina Senior School and moved to London in 1960. He worked as a British Railways wages clerk while also achieving an ordinary national diploma. Ali studied at West London College with Errol Brown of Hot Chocolate. He wrote his first poem in 1969 and actively depicted his experience with physical attacks due to racism. He became part of the Radical Alliance of Poets and Players (RAPP). In 1975, Norman Beaton, Rufus Collins, and Ali took over leadership of the Dark and Light Theatre Company (founded 1969 by Frank Cousins as the first professional multicultural radical theatre company in Britain). They renamed the company Black Theatre of Brixton and this is where Ali produced his plays Dark Days and Light Nights, Black Feet in the Snow, Black by Night, The Twisted Knot, and Jericho. Ali also wrote for Temba (Exodus), Theatre Centre (Bunkers), and Black Theatre Co-Operative (Slipping Into Darkness produced at the Gate).  The 1977 film Black Joy, based on Dark Days and Light Nights, is credited as the UK’s only example of a Blacksploitation film.

Below are some extracts from Jamal Ali’s interview, a full account of the topics covered in his interview can be found at Jamal Ali Topic List page. Jamal Ali was interviewed by Unfinished Histories in 2016.

‘Rufus Collins was there [at the Black Theatre of Brixton] and he bring forward the technical thing in theatre and so on, and I was doing a lot of the administrative work and the writing work, but I used to participate in the workshops that we had every evening. But the process was training, training to become actors and actresses and we had that because Rufus was there- he had total understanding of the theatre and movement, and we had dancers, choreographers that he paid the Black Theatre to come and train there. But we had people who were coming in there to train… we spend a lot of time practicing… the theatre and what it is all about. I used to write but we encourage all the members of the company to write, direct, look at the lights and so on and some of them, many of them, became light designers and so on and so on. So it was a theatre company that was very inclusive and we had everything you know.’