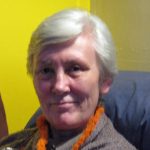 Jan Dungey has been a performer and a performance maker in physical and in environmental theatre communities, as well as a theatre director and an Arts Development Officer. After university at Bristol and a PCGE at Bretton Hall, she worked with Stirabout, the first theatre company to work in prisons and then became a founding member of the devising physical theatre company, Cunning Stunts, with whom she made funny, risky, knockabout shows for fairs, festivals and theatres. She later worked with Circus Oz and Women’s Circus in Australia, moving to East Anglia in the 1980s, setting up the environmental Company of 1/Magi/Nation  to make devised work for woodlands, sites and trails. In the 90s she was an Arts and Cultural Development Officer and Consultant and helped form what has become ADUK – Arts Development UK.

For more Cunning Stunts images see the Iris Walton and Cunning Stunts web pages.
Below are some extracts from Jan’s interview – a full account of the topics covered in his interview can be accessed at the Jan Dungey Topics List.

What Cunning Stunts were about

‘We just wanted to deal with physical comedy first, coz there were no physical female comedians – well there were no female comics really. It was before the stand-up; it was when alternative comedy was starting up. So there were very few comics around, certainly very few female comics around. It just seemed to be the bar. There were women doing the serious work, like Monstrous Regiment and Women’s Theatre Group, and there still didn’t seem to be anybody doing things. Men were allowed to be physically funny, and there was the Ken Campbell Roadshow and those sort of people, and there just weren’t any women being physically funny. We just thought that was a shame really, because we just found each other very funny. It’s like, you remember, you know, when you’re sort of littler kids and you just do stuff and find it funny and the other kids find it funny and it just gets funnier and funnier, well it was kind of like that. And we were sort of in the context of a lot of –  there were quite a lot of male groups who were doing things, sort of male comedy stuff – and there was one year when we were doing lots of shows in fairs and festivals and outdoor things, well it seemed like all of the male companies were taking their clothes off for some reason or another – they all found it screamingly funny or whatever – and we did this piece, and I remember saying, ‘In this show nobody will take their clothes off’, and there was this great roar of applause from the audience, because everybody was so fed up with these men going to the extreme, I suppose, of just taking all their clothes off. We were supposedly finding it  funny, which we didn’t particularly. But I remember Erin [Steel] and I came up with this thing of these packs of women who went round in plastic macs, you know, like sort of male flashers; went round in these plastic macs but we wore plastic rain hats as well and we’d devised a song which was completely stupid, called Everyone Has One Or Two Nasty Things They Love To Do. And we dedicated it to all the women who exposed their labia in public places – which of course doesn’t exist. You know, there is no such thing as a female flasher. I don’t know, we were just sort of subverting various things and we just found this funny. We had this gang, all these raincoats and stuff, called The Others and they just went around exposing themselves.’

Links:
Waveney and Blyth Art
The Fairs Archive – The East Anglian Fairs 1972 to 1986