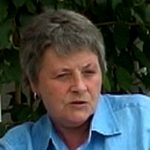 Kate Crutchley trained at the Birmingham School of Speech and Drama and acted in Rep, TV and radio before appearing in Fringe productions such as Steve Gooch’s Female Transport at the Half Moon and the musical The Lady or The Tiger. She directed early Gay Sweatshop productions including Care and Control, and was a co-organiser of the Women’s Festival at the Drill Hall, 1977. In 1980 she was appointed Theatre Programmer at the Oval House where she put on an exciting mix of work including ground-breaking women’s and gay and lesbian companies and experimental work. She also directed many productions with her company Character Ladies including the acclaimed Patience and Sarah. She continued to work as an actress and director in a range of contexts. She died on 21st July 2013 after a long illness.

Plays:
Care and Control (devised by Kate Crutchley and the company, with Michelene Wandor, 1977) in Strike While the Iron is Hot: Sexual Politics in the Theatre ed. Michelene Wandor (Journeyman, 1980).

Writings on:
Putting Your Daughters on the Stage: Lesbian Theatre from the 1970s to the 1990s by Sandra, Freeman (Cassell, 1997)