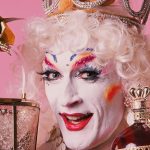 Below is an outline of the topics covered in our interview with Lavinia Co-op in 2013, recorded to assist with the construction of the BLOOLIPS company webpage.

Interview contents include: How he became part of BLOOLIPS, getting to know Bette Bourne (BB). West London gay and drag scene of late 60s, early 70s. GLF (Gay Liberation Front), then CHE (Campaign for Homosexual Equality). BB wanted to create his own theatre group inspired by his work with American troupe Hot Peaches with whom he had worked. Bit about Hot Peaches and their work. BB’s first show, Just Myself. BLOOLIPS developed from that. First show written By Jon Jon (Taylor) (JJ) was Ugly Duckling. Description of Ugly Duckling including song examples. This was followed by Check or Marie Maison Blanche (Mary Whitehouse). Description of Check + song examples. Toured Holland, then Germany. Tensions of touring. New show with tour Vamp Not Camp. Description of what it’s like doing a tour of one night stands. BLOOLIPS work well received by local gay audiences in Holland and Germany. What BLOOLIPS shows were like and there aims. JJ returned to write Lust in Space. Further tensions between JJ and BB. Strengths of both in terms of their contribution to BLOOLIPS.  Part of Festival of Fools tour in Europe arranged by the Melkweg, Amsterdam. Talks about two companys on tour – Oink and Theatre de le Pain. BB had saved enough touring money to take them to New York. Run at the Theatre for the New City followed by 4 month Off Broadway run. 2 months in San Francisco. Memories of NY at the time. Personal reflection of time with BLOOLIPS and how it fed into his own work when he left mid 1980s. Spent 20 years in NY from 1991 working in night clubs and performing two solo shows. Returned to London in 2010. Performing drag show in night clubs and with other set ups and people.