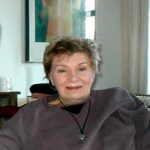 Sheila Allen had a long and distinguished career as an actress on stage and screen, and as a teacher and lecturer. She trained at RADA and appeared in many regional theatres before ten years at the RSC and later, several TV series. Her feminism and her friendship with playwright Jane Arden led to her involvement in the innovative feminist theatre piece Vagina Rex and the Gas Oven at Drury Lane Arts Lab, 1969. She also appeared in Arden’s Holocaust at the Open Space and the film based on it, The Other Side of the Underneath. She went on to play the title-role in Pam Gems’s Queen Christina at the RSC. She continued to act and to teach at drama schools and institutions across London right up until her death on October 11th, 2011.

Extracts from the interview

‘Everything was shifting, ’68 was such a fantastic time. All those revolutions, the awful happening at Kent State, Paris shutting down, everything. The Beatles. The whole world was in the most wonderful change, and everybody is so rude, so put-downy about hippies and such. If only they knew that therein was a revolution that didn’t quite evolve, it moved, and the greed generation came in. Greed was so, so, so destructive.’

Vagina Rex and the Gas Oven at the Arts Lab, Drury Lane