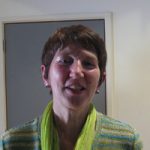 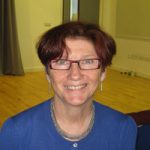 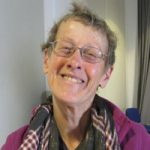 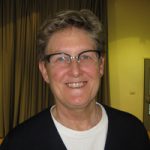 This page is both a Company page for Siren and an Interviewees page for Jane Boston, Jude Winter, Tash Fairbanks and Debs Trethewey who were interviewed together about their work with Siren by Unfinished Histories and the Women’s Liberation Music Archive in 2012. Please click on one of their names to open their biography page.

Siren the band re-formed in 2014 and played benefit gigs for Unfinished Histories in 2015 as part of Homosexual Acts and in 2016.

Below are some extracts from Siren’s interview – a full account of the topics covered in his interview can be accessed at Siren Topic List page.

How the shows were written

Jude Winter: (with Jane Boston, Tash Fairbanks and Debs Trethewey chipping in) A lot of the way Tash scripted was not, as perhaps, in terms of physical improvisation…  it would be discussing ideas, discussing characters, saying how we wanted to be, and then Tash went away and pulled that into a scene, and then we’d try out the scene and think about where it would go. But it was an improvisation in a more contemporary way of improvisation, it was ideas and thinking about characters, and how could an idea be made theatrical. It wasn’t standing up and improvising, you know, we did that later; but at this point it was absolutely sitting and talking ideas and politics, but then, making it theatrical and thinking…and the characterisation, and how could it… – it was talking it, and then saying, ‘OK Tash’, you know, ‘tomorrow see what you bring us’

Jane Boston: Then how did we do the music?

Jude Winter: Lots of the music writing was you and me writing the music, so one of us would come with a sort of an idea and start improvising around that and – literally this time, absolutely improvising – and it might be with Jane, she might have come with some lyrics and maybe a refrain and then I’d put something to it or I’d start…and synthesizers were fantastic in those days because there was that sense that you could develop and make atmosphere, so it wasn’t just about the song. And if you listened to our songs of lot of it very theatrical, and so having a synthesizer was wonderful, we could make sounds and music, and then Jane would come in and then Tash would improvise and then when Debs came along -we both had drum machine and live drums, so we could really play with music.

Working on the dole

Bibliography:
Pulp; Now Wash Your Hands, Please; and Curfew in Pulp and Other Plays by Tasha Fairbanks edited by Gabriele Griffin and Elaine Aston (Amsterdam: Harwood Academic Publishers, 1996)
Fog  by Tasha Fairbanks and Toby Wharton (Methuen Drama, 2012)
‘From Stage to Screen and Back: Tash Fairbanks’ Nocturne Shedding Some Light on Lesbian Representation, and the Performance of Lesbian Desire’ by Jan Goulden in Acts of Passion: Sexuality, Gender, and Performance ed. Nina Rapi, Maya Chowdhry

Back to Companies
Back to Individuals