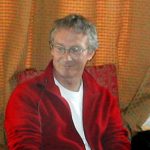 Tony Coult  studied drama at Birmingham University where he was taught and strongly influenced by Clive Barker and his work with Theatre Workshop and Inter-Action and by popular and Brechtian theatre models. In 1971 he visited the Leeds-based community arts project, Interplay, and joined, first as a volunteer then a company member, working with them on a mixture of social educational youth theatre work and artists’ theatre along with  ‘Dramascapes’ involving street theatre and site-specific events. On leaving Interplay he completed a book on Edward Bond, a major influence and became a theatre reviewer. He went on to work with Leeds T.I.E and then Perspectives Theatre Co. in Peterborough. He also became very involved in the Standing Conference of Young People’s Theatre (SCYPT) and the political struggles around T.I.E as Thatcher’s cuts began to bite. He has since worked as a playwright , especially in community plays, young people’s work and radio and a teacher, first at Rose Bruford College, subsequently Loughborough and De Montfort universities and elsewhere.  He is now organising the Interplay archive project ‘The Left Must take the Right’

‘ I would speculate that Leeds is as important to an alternative theatre coming together as Liverpool was for Rock music a decade earlier in the mid sixties, early sixties, mid sixties. ‘Cos I think not only do you have those people you’ve talked of, you’ve got Albert Hunt [Bradford Art College Theatre Group] in Bradford, you’ve got John Fox [Welfare State] teaching in Leeds. You’ve got Interplay bringing its Interaction influences and methodology. I think you’ve got one of the centres of political anarchism. The guy called John Quayle who wrote the first history of the English anarchists who briefly worked as a volunteer, I think, with Interplay. There is a huge dynamic energy. You’ve got General Will beginning to come together down in Bradford which is obviously where David Edgar has his roots, where Noel Greig has his roots – artistically anyway – so there’s an awful lot going on in Yorkshire at that moment, and I think there is space for a book to written about the Yorkshire dynamic at that moment.’

From Inter-Action to Interplay

Unpublished plays include –
For adults:Mr Minchip’s Utopia: Waiting for the Rainbow; The Spirit of True Christmas; A State of Health; The Last Royal of East Barking Creek; The Devil On the Heath; Another Part of the River
For Young People: Basement Bargains; Mapping the Stars; Plague of God; Inside the Volcan; The Missing Element; Magical Powers (For Twenty-Four Hours); Babble!
Critical Works:
About Friel: The Playwright and the Work (Faber and Faber, 2003)
The Plays of Edward Bond (Methuen Theatrefile, 1977, 1979)
Engineers of the Imagination: The Welfare State Handbook, co-written with Baz Kershaw (Methuen 1983, 1990)
At the Inland Sea  (support material for Edward Bond’s play) (Methuen, 1997)
Contributions on theatre and drama in: Time Out, Times Educational Supplement, Englisch-Amerikanische Studien, Canadain Theatre Review, RSC Newsletter, Plays and Players, Platform, e-Magazine

Oral history projects:
‘The Left Must Take the Right’ – The Interplay Archive Project