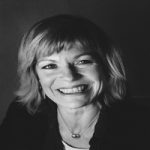 Annabel Leventon grew up in Hertfordshire and went to Oxford University  from 1961-64 where her peers included  David Aukin, Nicolas Kent, Richard Eyre and Michael Palin. Despite Oxford Dramatic Society’s continued refusal to admit women, she was invited to act with them, gaining experience, reviews, an agent and touring France as Desdemona. She also joined the Fourbeats pop group and was active in the Experimental Theatre Club. She went on to study at LAMDA and then briefly went into rep before being invited in 1967 to perform at the Traverse in plays by Stewart Conn and Stanley Eveling. At the Edinburgh Festival  she encountered the work of La MaMa who invited her to join them in New York. She spent 8 months there, helping form a new Grotowski-inspired company alongside Nancy Meckler and Andy Robinson. On her return to London Tom O’Horgan cast her in Hair. She went on to re-direct the play and appear in it in Paris . She appeared in Stewart Parker’s play Spokesong when it premiered at the King’s Head and on its West End transfer.  Later appearances  have included The Rocky Horror Show and Jeffrey Bernard is Unwell as well as many films and TV series including London Bridge.  As a writer she scripted Rock Follies of ‘77 about a women’s rock band. She continues to work as an actor, director, writer and teacher.

Seeing La MaMa at Edinburgh, 1967
‘On the Festival itself there was a company, an American company that had been invited to the Festival and they were doing I think 4 plays, 5 plays.  I went to see one of their plays, it was called Futz [by Rochelle Owens] – a carefully chosen title, FUTZ – and it was about a village, an American small town, anyway, of rural people and this farmer was in love with his pig and of course was ostracised and I can’t remember what happened to him, but it was Tom O’Horgan’s Café La Mama company and when I saw that my eyes were open to what theatre was. That’s what I’d been looking for and I hadn’t seen it anywhere, anywhere, anywhere and there it was. It was extraordinary work. It was so physical, it was Grotowski-based, yoga-based exercises and I went, ‘Oh that’s it! I’ve got to do that work.’  So I saw all the shows they did and hung out with them and said, ‘I’ve got to do this work, I’ve got to do this work.’  ‘Well come and join us’, ‘Huh huh how can I?’  They said: ‘Why not?’ So I saved up for 3 months, 4 months, I don’t know how that’s possible actually.  I did a couple of television series and I don’t know what else and I just put all the money that I possibly could aside and got the cheapest flight I could, which was amazing, it was Icelandic Airlines, and the return flight to New York was £100 and that was a helluva lot of money. That really changed my life forever.’

With La MaMa in New York

Back to Interviewees L-Q
Back to individuals