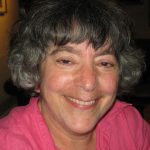 Carol Moss was a student at Bradford University in modern linguistics and her interest in politics and social change led her to involvement with The General Will. She was administrator of the company from 1973-1975. She worked particularly on The Pub Show and The Prison Show. She continued to organize the tour for Road Gang after General Will’s reorganization, then returned to teaching, working in continuing education at Bradford College.

Interview precis + timings: Came to Bradford from London in 1968, student in contemporary languages at Bradford had been involved in theatre, but didn’t do it as much at University, interested in Latin American politics, studied French and Spanish (:20); seeking political and social debate (:53); joined the home tutors scheme for Pakistani women coming to join their husbands here (1:24); parents were communist party background, but she was skeptical of parties (1:45);  friends met at university were Johnnie Buck and Margaret Robson, through Johnnie met Dusty Rose (2:05); was not a social science students so didn’t have time to engage in the same way with debates, but brushed up against (2:45); in the early 70s she finished her degree, went away, lived in Chester (3:30); missed Bradford and was aware of theatre happening in Bradford, then joined in acting in Yesterday’s Revolution by Greg Philo which performed at the opening of White Chapel Gallery in London, she played a suffragette (3:30); came back in 1973, lived with Buck in Robson, knew what was happening, was a full time teacher then started doing admin for General Will (5:03); joined company when its legacy was shifting an changing as it does when new people come on board (6:12); interest in taking the theatre to the people (6:40); became administrator when the previous administrator left and the flat she shared with Buck and Robson became a hub of discussion and debate, creative time (7:00); professional theatre company trying to do professional touring, alternative medium, strong commitment to everyone’s opinion and shared writing (7:17); company had a performance space at the bottom of the road in Manningham not far from where Moss, Buck, and Robson lived (8:20); pub theatre— the idea was to be able to do a pub show, a cabaret 8:56); description of the Pub Show, in part based on recent reunion of the company using the name The Generally Unwilling to sing music from the shows (9:50); the company was embedded in social movements, responding ot topical events, especially around housing activism (10:20); who was funded by Arts Council grant (11:15);  ‘zapping’ of General Will in 1975, shows from interim period (11:50); formation of Road Gang to finish commission about the Medwell Estate (12:20); extending beyond Bradford base (13:40); association of Whitechapel Show and General Will, for instance, Eve Brook later marries David Edgar (14:15); Moss put together the touring program, quite extensive (14:56); Pantomime Dickripitdown about the pulling down of houses (15:20); was script for Dickripitdown collectively devised or scripted by Noel Greig  (16:00); nothing written only by one person, but writing was Noel’s skill, he was a great scriptwriter, massive asset to company (16:50); we argued and debated hard and then something would happen (17:26); wasn’t a tyranny of leaderless that we suffered from because people took their turns (18:56); Pub Show went down very well in the trade union halls (10:10);  role of directing and design, no separate designers, Johnnie built a lot of the set (19:20); booking tours (20:37); Tour and purpose of The Prison Show (22:00); work with Brian Hibbard (22:50); Hibbard left to join 7:84 (23:40); important for people like Noel and Brian to have a professional trajectory (24:00); a lot of sexual politics in Bradford at the time (24:40); some of it quite divisive, seemed to separate friendships and people instead of join them together (25:00); issue of private vs. public discussion regarding Gay Liberation Front and General Will, friendships changing, everyone was in exploratory phase of life, everyone questioning, exciting but divisive (25:45); it was challenging, it was ardent, there was a class element to it (28:00); Moss taken aback when Noel said he was feeling harassed and it hard to be admin in those circumstances (28:57); distressed, but continued her job until her services were not required — new iteration of the company literally sent her a sack (29:30); new company didn’t want her to be involved (31:30); how the zap happened – Noel steps out of role at benefit for International Socialists – and aftermath (32:20); dilemma of the organization’s dynamic—let it evolve or revolutionize it, pain and confrontation, personal relationships blowing up (33:50); after she left admin, she did supply teaching and was childminder for an actress in Road Gang (34:35); got a job at further education at Bradford College, not working in theatre since (35:37).