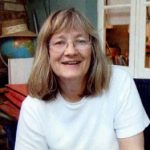 Kate Owen worked continuously as a Theatre Designer for 35 years, and designed over 150 shows. She was trained at Central/St Martins, London in 3D Art and Design (Theatre) Hons, and assisted Nadine Baylis and later Ralph Koltai after graduating. Although early designs were for regional Repertory Theatre, she soon discovered a new theatre emerging that reassessed the use of space in theatre buildings and the designer’s role within that process. Designing Xingu, a huge music theatre event by Vic Hoyland at Snape Maltings, Suffolk, offered a showcase and she was invited to design many comedy acts, cabarets, parties, music events and new plays at the Albany Empire in Deptford, London. This led to collaboration with leading artists and companies including Laurie Booth & Co, Royal Court, Live Theatre Newcastle, Blood Group, Gay Sweatshop, Traverse Theatre Edinburgh, Theatre Centre, Extemporary Dance Theatre and Circus UK. From 1984-90, she was on the Gay Sweatshop Management Committee, and was instrumental in setting up GS X 10 (with Noel Greig) and GS x 12 (with Philip Osment), the new writing festivals. During the 90’s she taught Theatre Design part-time and designed shows for Birmingham Rep, West Yorkshire Playhouse, Nottingham Playhouse, Royal Court, Shared Experience, Anvil Basingstoke, several touring companies and The National Theatre. In 2000 Kate was invited to return to the Albany as Interior Designer for a large refurbishment programme in connection with the Art of Regeneration, a National Theatre project. Following this Kate became Design Consultant for several proposed Theatre Spaces for schools in Bexley, Essex, and also the YMCA in London. In 2009 she returned to art school (The Cass, London) for 4 years and obtained an FDA in Furniture Making.

Design and photographs © Kate Owen
For more design images and show information see Kate Owen’s website.
If you would like to see further images of The Gorgeous and the Damned, Poppies or Ruckblick please contact us.
You can get information about the topics covered in her interview by visiting her Topics List page.

Work at the Albany Empire

‘So we [Kate and David Fielding] did Zeppelins Over Deptford, yes, so I do remember, going there for the first time [Albany Empire, Creek Road]. We’d never heard of the place. It was like a lot of those alternative theatres; it was grimy, sort of sweaty, old fags on the floor, you know what I mean? But full of atmosphere. Of course we were attracted to it because Jenny [Harris] was always really into design, so it seemed like an exciting place for designers to work. At that time they used to use Freeform a lot, and the thing was to do the design, fill the whole space with the design, and we thought that sounded great. So we designed that together. They had a company of actors that was an ever-changing thing, Marcel Steiner, Aviva Goldkorn…Fred [Alfred] Molina, he was in it. I can’t think who else, but anyway…we roped in all our friends, to help with the set. They had their own, in-house chippies, the two Terrys; and it was Café Theatre, and we quite liked the idea of that. The politics of the place at that time were much more kind of socialist theatre for local people. The Albany was quite a cool place to travel to from other parts of London. The thing that was special about the Albany was that it had a bar in the space – well it was to the side, but I mean it was in the theatre space and the idea was that the theatre sort of hugged the audience. And they could smoke. And then it was always the case that you’d have your bit of theatre and then at the end of it you’d have the treat, which would be that you then would have like a disco and you could let your hair down, all in the same space – and food. And you could chat while it was on…so it was pretty raucous, rough theatre.’

Gay Sweatshop management in the 1980s