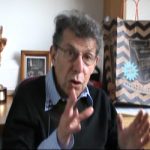 Mark Long was interviewed by Unfinished Histories in 2014.
For a list of topics covered in his interview see Mark Long’s Topics List.
For interview viewing details see Viewing Interviews.

The People Show– an exhibition of people by God

Mark: [Susan Croft- I know that Jeff Nuttall started the first one with a script] I wouldn’t even call it – yes, it was a script in a sense, but it wasn’t entirely, it wasn’t a script for a show that lasted over an hour which in fact the show did – it was a ‘Structure’, I would describe it as, with actions and costumes and props, and within that there were huge moments where it just said ‘cast improvise’, ‘cast do what they want to do’,  kind of thing. Because he always compared us to a jazz band, that’s how he thought of the People Show. It was a jazz band. There was a chorus, people stepped forward and took solos, people stepped forward and did duets. That’s how he thought of it and that’s in a sense how he wrote, because he was a jazz musician, he was a poet. So that very first People Show was actually called The People Show – that was the title of the show, The People Show – an exhibition of people by God’, and that was where our group name came from because people started to call us it. It was a good name – it was a very good name and we nearly did a really silly thing at one point , Jeff was suggesting, and thank God we stopped him, at one point he was wanting to call it P-E-E-P-H-O-L-E –  Peephole Show – and that would have been aarrgh – we couldn’t have lived with it. For fifty years – could you? The word ‘show’ has come back, the word show then was like an old fashioned word – the actual word ‘Show’, but it was more like to do with vaudeville or the music hall – but it’s come back as a word. If people ask me what’s the roots of the whole thing, I’d say primarily they come from the visual arts world and from vaudeville.

Back to Interviewess L-Q
Back to Individuals