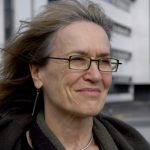 Mica Nava played a pivotal role in the establishment of feminist theatre companies in Britain as a founding member of Women’s Theatre Group and key driver of their early consciousness-raising work and school performances for teenage girls. Born in London to a Dutch mother and a Jewish father, Nava attended Bedales school. In lieu of university, she lived and studied art in New York and was an early leader at The City Gallery. She traveled to Mexico, and married Jose Nava. The couple returned to London in 1964 and subsequently became involved with alternative theatre and the women’s liberation movement. Nava attended the London School of Economics a mature student and took a degree in sociology while Jose joined The People Show in 1970. As part of the Belsize Lane Women’s Group, Nava met theatre writers and actors. She then participated in the 1973 Women’s Theatre Festival at the Almost Free and stayed in the WTG collective until 1977. Nava left theatre work to pursue her PhD and has carried out a three-decade career as an academic in the humanities and social sciences, publishing five books on cosmopolitanism, race, difference, feminism, art, commerce, and politics.  In 2014, she retired as a Professor of Cultural Studies from the University of East London.

Below are some extracts from Mica Nava’s interview. For topics covered in her interview see Mica Nava Topics List.

Mica Nava’s interviewed can be listened to at the British Library Sound Archive and Sheffield University (from late 2017) and now at the Bishopsgate Institute.
For viewing details see Viewing Interviews.

Bibliography:
“A Love Song to our Mongrel Selves: Cosmopolitan Habitus and the Ordinariness of Difference” in  Visceral Cosmopolitanism: Gender Culture and the Normalisation of Difference by Mica Nava. Oxford: Berg, 2007 (See below)

Links:
“A Love Song to our Mongrel Selves: Cosmopolitan Habitus and the Ordinariness of Difference”

Mica Nava was interviewed by Unfinished Histories in 2015.