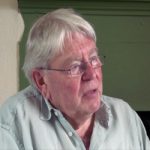 Mike Lucas was born in Coventry. He left the LSE with a law degree and went to Webber-Douglas School of Dramatic Arts prior to rep and TIE work and regular appearances in television series such as The Liver Birds and Dr.Who. Lucas had founded Mikron Theatre Company – an  irregular touring company – in 1963 with his wife Sarah Cameron and friend Ron Legge. It was some years later that he came up with the idea of combining his and Sarah’s love of canals and with that of theatre. Mikron really took off in 1972 with Still Waters – a history of Britain’s waterways. The company performed at pubs and village halls  alongside the canals and the company soon acquired their own narrow boat Tyseley. Still Waters set the pattern for the ‘Mikron style’ combining political history and social awareness with original song writing, live music and popular theatre. Working  in the ‘drama-documentary’ mode Lucas led on the research and writing whilst also directing and performing the shows along the canals every summer! Canal subjects were also central to Keep Yer ‘Ands Off; I’d Go Back Tomorrow; Mud in Your Eye and  Puddle It  but Mikron’s output was much wider tackling women’s suffrage in A Women’s Place, the brewing industry in Beer Street and the Yorkshire Luddites in A Place to Stand. From 1986 Lucas stepped back from performing with the company and took over the admin role previously done by Sarah. Mike continued to run the company until 2005. Mikron are currently celebrating 45 years as a touring company.

For further details and images can be found on the Mikron Theatre Company web page.

Below are some extracts from Mike Lucas’ interview – a full account of the topics covered in his interview can be accessed at Mike Lucas Topic List page.

How it all began and why

‘What Mikron Theatre Company started, in an offhand sort of way in 1963, when we took a show to the Edinburgh Festival and kept it going on an irregular basis from then until 1972, when I had an idea of taking it on the waterways, –  the idea was to take theatre to people in areas which they wouldn’t expect a theatre, to see theatre, and presenting it in a way which was affordable as well – they could see theatre that they didn’t have to spend a fortune on, and seeing subjects that  they would never have expected to have seen done in the theatre, and in the beginning particularly about canals. And I think the way I thought then was – this was a radical way of doing educational theatre.’

Working on the boat

Mikron show – I Go Back Tomorrow