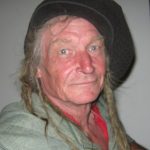 Bobby Weaver (1952?-) was an actor, singer, and writer with The General Will from 1972-1975. After leaving school, he worked backstage at the Ashcroft Theatre in Croydon, and then made the move to being a performer, working for the Theatre Centre doing TIE. He also did doing street theatre with Canned theatre and agit prop with West London Theatre Workshop. He moved north and became involved with General Will as a performer in State of Emergency. He also performed in a revival of The National Interest and the premiere of Dunkirk Spirit. He worked with Road Gang after General Will reorganized, and performed as a musician with Red Ladder before relocating to France.

Interview precis + timings: Hated school, got stagestruck, got attached to music and theatre, teachers inspiring, growing up in south London, Croydon (:51); English literature teacher was a Hollywood refuge, someone who got burned out by McCarthyism, personal friend of Brecht, named Walter McElroy, unusual view of the world in that setting, possibilities of theatre (1:15); got a job backstage at the Ashcroft theatre in Croydon, West End try out house, earning lots of money because there was so much work on get ins and get outs, c. 1968-1969 (2:20); auditioned for Theatre Centre TIE company (3:54); audience in a circle, audience participation, craft making doing theatre in schools (5:15); also participated in Canned Theatre, an experiment more than a company, street shows, circus shows in tents (6:00); played Pierrot, mimed hanging himself (6:40); influenced by Grotowski (6:58); also involved in Canned Theatre—Paul Barnard, Desmond Hansberry (7:30); circus work, physical work in marquees, gallery in Fairfield Hall (which Ashcroft was part of), influenced by Ed Berman (8:10); also working with West London Theatre Workshop and Bruce Bircham, also worked with him in Sheffield (8:50); equity job at Theatre Center, on the dole, living in squats in Westbourne Park Road—in a sense, the dole and a more relaxed attitude toward squatting were an extra Arts Council subsidy for a lot of what was going on in that time (9:30); Ambiance first on Westbourne Park Road and then moved to Kentish town – Weaver saw some of Interaction’s work at the Almost Free (10:50); the breaking down of barriers about where the audience was, how the performers worked (12:00); followed a woman who he met at the Oval (of course, where else?), Anitra Jones, to Bradford where she was working with Albert Hunt at the Art College (12:50); heard General Will was looking for another actor (14:05); hadn’t seen their work yet; when he joined the members were Sue Ashton, Bryony Bird, Alan Hulse and they did State of Emergency (14:40); then revived National Interest, then did Dunkirk Spirit; enjoyed doing the shows because of the rapport between the performers (16:05); David Edgar’s involvement in the rehearsal process after writing the script (18:02); Weaver suggested having Noel Greig get involved during Dunkirk Spirit (18:40); unrecognized, subterranean work vs. getting recognized, commitment to avoiding the classic theatre circuit, except we still did it (19:50); reflections on non-conventional audiences/spaces as well as tours of Holland (21:00); the roles Weaver played, hard to remember because you slot on/slot off many characters and playing the guitar (22:50); in The Pub Show, played Maureen in drag, Maureen was a bloke quite nicely made up, short skirt, medium heels, but behaving like a bloke, trying to challenge gender presumptions (23:20); was Noel Greig’s sense of needing to talk about sexual politics in part a reaction to that? (24:30); actor’s craft vs. the person telling their own story (25:30); not in a theatrical bubble, no way to be separated from the intense politics of the time (26:00); context of actions of National Front in Bradford at the time, and the basic racism, plus the mills closing and industrial decline while we were trying to construct alternatives (26:50); the problem of being an all-white company, one of many ambiguities about the company that opened the door to the zap (28:55); observations of the company ‘post zap/coup d’etat’ (29:20); the zap was a theatrical moment par excellence (30:22); how the audience perceived it – it wasn’t simply a random audience, even though it was part of the company’s natural audience, still people’s sense of shock (32:30); thinks there is an audio tape of the event and maybe Gerald MacLachlan has it (34:30); whether or not to go on as a company (35:15); developing Left Down the Middle with Denise Speight not officially a General Will show, but part of the brief (35:40); General Will performers moving into the community for other projects on the side was a policy about the diffusion of skill (for writing scenes, songs), taking it to the community (37:40); show created with single mothers in the area (40:00); Left Down the Middle performed at the Library Theatre (42:20); Eric Fairchild might have scripts for those scripts (44:30); Weaver went of up to Newcastle to work with Road Gang after General Will split (45:33); Jim Brady as administrator for Road Gang (46:40); worked with Red Ladder mostly as musician (47:00); Libby Mason directing for Road Gang (49:00); Weaver then moved to France and worked as an electrician and builder there for 20 years near Bordeaux (49:40); in France mostly played in bands (50:30); post General Will, but prior to relocation to France involved with Café d’Espoir, a surrealist/Dadaist cabaret idea, c. 1980 (53:10); a recent reincarnation of Café d’Espoir in 2013 (55:10); on alternative theatre in summation: ‘for me, it has formed me, in the sense that the craft I had been pretending to practice reached a kind of culminating point’ (56:30)