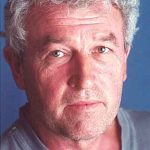 After training at the Bristol Old Vic, Gavin Richards worked at the Liverpool Everyman and then with radical playwright John McGrath, in 7:84. Joining the Ken Campbell Roadshow in the early 70s he got performance experience working outdoors, in pubs and clubs. A lucrative German tour gave him and a group of colleagues the financial security to set up Belt and Braces Roadshow Company, formed with Eugene Geasley, Marcel Steiner and Jeni Barnett. Their leftist political and musical roadshows were taken to trade union meetings, working-men’s clubs, colleges and schools as well as traditional theatres and arts centres. Inspired by working with Alan Dosser at the Everyman, Liverpool, with Ken Campbell’s Roadshow and John McGrath’s 7:84 Theatre Company, Richards founded, acted, directed and wrote for this collective. With 7:84 Richards had also directed Arden/D’Arcy’s Ballygombeen Bequest and Adrian Mitchell’s Man Friday and worked with both Richard Eyre and Trevor Griffiths. Many B&B members had worked for one or more of those companies and over the course of its 12 years on the road some of its members went on to form other companies like Monstrous Regiment. John Fiske, B&B’s musical director and Paul Kessel formed their own company in Sweden, still working today [Kesselofski & Fiske].  B&B also collaborated on joint productions with both 7:84 and Roland Muldoon’s CAST. Others involved in the early years included Shane Connoughton, Sylvester McCoy, Vari Sylvestre, Andy Andrews, Gillian Hanna, David Bradford, Derek Thompson, Jim Carter and Colm Meaney. As well as writing original scripts with the company, Richards directed and adapted other political plays, most famously Dario Fo’s Accidental Death of an Anarchist based on a translation by Gillian Hanna which ran in the West-End for two years after an extensive tour starring Alfred Molina. more…

The emergence of Belt and Braces as a company

‘So what I’m trying to say is all these little creeks, at the same time there were other creeks going on in other parts of the country, and they were all beginning to focus together and of course, there was the big, a big movement in the Labour Party to actually push through a concerted cultural programme which included building new buildings in the provinces and funding all kinds of more cutting edge work, different types of work, and so more people could take advantage. So the people who’d come through the system that was, like me, but who’d felt very uncomfortable with it, and didn’t really – maybe some of us knew that that was a political discomfort, couldn’t articulate it, and some could, all found somewhere to go. We all found somewhere to go, and we started up our little creeks, and I had been incredibly influenced by working first at the Everyman [Liverpool], then meeting up with John McGrath [7:84], working with John McGrath, through him working with people like Trevor Griffiths, working with people like John Arden, and also at the same time working with people like Ken Campbell who was actually out there, in theatrical terms, taking on the danger. They were in the theatrical houses taking on the material, Ken was out in the community taking on the audience. And I felt that somehow I had to bring those two things together and that’s why in the end I ended up trying to blend those two things in the early years – I was still only about 24 – and that’s how my little company started up, there was only 4 of us, which was the Belt and Braces.’

Bibliography:
England Expects by Gavin Richards (Journeyman Press 1977) can be purchased from the Unfinished Histories shop
Accidental Death of an Anarchist by Dario Fo (Pluto,1980)