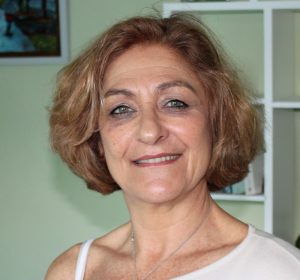 Growing up in Glasgow Iris ran away from home at 16 to become an actress. In Paris with no money and no  contacts, she met the theatrical dynasty – the Serreau family – who took her in, thus giving her the opportunity to study with Etienne Decroux and Jacques Lecoq. After 5 years of mime, theatre, dance and acrobatics she returned to London and set up Still Life Mime Theatre in 1974. When Jan Dungey joined the group they together founded Cunning Stunts – a company of wild women performers and musicians who, with a nucleus of 6 members, toured UK and Europe for 6 years. The company was famed for its unique flavour of energetic and archaic humour, circus and music. In 1980 Walton left the Stunts, for a taste of something new, travelled to Berlin, met and directed a women’s theatre group at the ufaFabrik where she lived for 6 months. She then took to the road with her boyfriend and hitching round the south of France bumped quite literally and quite by chance into the Stunts. Happy by this fortuitous reunion she returned pregnant to London and rejoined the company for one last show. In 1982 she had a son and, soon after, she took a break from the theatre for 5 years but was back teaching theatre and acrobatics and directing full-time by early 1990’s, in colleges and at Circus Space as well as leading acrobatic cultural programmes into West Africa. With her deep desire to continue traveling into the unknown she moved permanently to West Africa in 2000. After 2 years living in the Gambian countryside with no electricity or running water she joined the newly established University of the Gambia – teaching drama, creative writing, public speaking and acting for 8 years. She then joined Janet Badjan-Young who was setting up the first training programme for Gambian actors at her newly built Ebunjan Theatre. After working in West Africa for 15 years, Walton recently returned to live in London close to her son, family and friends.

Below are some extracts from Iris Walton’s interview – a full account of the topics covered in her interview can be accessed at Iris Walton Topic List page.

Wish You Were Here and becoming a women only company

‘Wish You Were Here – that was a series of acts. It wasn’t one whole show. I don’t think there was any connection between the acts.  Well I did Cosi Fan Tutti – the stripper, that I remember. I did like wearing different kinds of dresses to rehearse and things, it gave me a kind of feeling for the kind of mood I wanted to be…. There was a shop down near Victoria called Cornucopia  that did all kinds of vintage, glittery stuff – Spanishy stuff – and there was this dress with feathers and sequins – I played quite grotesque characters I may say but I liked sort of wild dresses to rehearse in. So I had this character called Cosi Fan Tutti and she was a stripper…and sometimes I did it with a great big grapefruit and sometimes I did it with fish and chips, occasionally an orange if I couldn’t find a grapefruit  – and it was to The Stripper music. I did this stripper act, peeling the grapefruit, or eating the chips I used to feed it , bits of skin, to people in the audience and at that time they didn’t quite know –  you know it started off as a kind of titillation and moved into this broad Glaswegian accent on the tables and it would change in mood so that the audience – and I did it with women as well as men – and they didn’t know, you know – it was like I kept pulling the floor from under them. They thought they were going down this particular act and then it would suddenly change and at the end I’d get the grapefruit and stuffed the whole grapefruit in my mouth quite grotesquely and the juice would come [out]. That was one act! And then we had three gangsters the [one I was was] called Herbert after my Dad – I can’t remember [the details] but it was a comedy – an archetypal kind of spoof, slapstick comedy. Jan [Dungey] and Simon [Prager] sang the Blues – ‘cos Jan is a really good blues singer with Simon and I can’t remember any other acts – there must have been other acts, but I don’t remember it, at all.  Well it went down really well and in the audience was Emil [Wolk] of the People Show and after the show he went ‘Wow! That was brilliant!…Really liked that! And it’s so good to see three really powerful strong women!’ and we went, ‘So we are! …Right – thank you Simon, but now we’re going to be an all-women’s company! That feels us, and right!’ and we were.’

Devising a show – The Odyssey

Iris Walton’s Unfinished Histories interview will be deposited with the British Library Sound Archive and Sheffield University late 2017 but is now available for viewing at the Bishopsgate Institute. See Viewing Interviews for contact details.