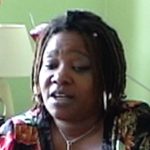 Jacqueline Rudet (aka Magdalene St Luce) was born in England but spent her early years in Dominica before moving to Britain. She studied drama at Barking College and began her career as an actress with the alternative theatre companies CAST and Belt and Braces, before forming Imani-Faith, a group founded to present theatre for and by black women. She went on to write for Black Theatre Co-operative, the Royal Court and Croydon Warehouse. Her plays include God’s Second in Command, Take Back What’s Yours, Basin and Money To Live. She lives in East London with her five children.

More Black Theatre Co-op images can be found on their web page here.

‘I used to direct for the Wet Paint Theatre Company, I don’t know if you ever heard of Wet Paint – Chris Ward. I directed for Chris Ward for about a year or two. They were a punk theatre company. To me it was really exciting. It was being Black, being a punk, being a woman. I mean talking about being radical, I was really, really extremely radical in those days. With Wet Paint it gave me an inner strength because it was so, so pioneering really for me as a Black woman, and it was a bit dangerous because in those days there was a lot of fascists around, you know, lots of people who hated Black people obviously, and being a token Black, I kind of, I did exploit it in a sense, because I would stand in the midst of a sea of white people and I just felt, I just felt so strong. That, if it makes any sense now I’m reflecting back, it was quite pioneering for a young Black woman to just, you know, endeavor to do anything, because you just went and made a stand, I suppose.’

Money to Live at the Royal Court