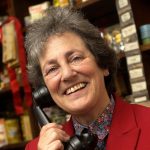 Pam Schweitzer grew up in a middle class Jewish family in Hale, near Manchester. Failing the 11-plus exam, with its attached stigma, affected her thinking politically. She studied English at UEA and then Drama at Essex. Teaching Drama in South London, and then as a Drama Advisory Teacher in Barking & Dagenham, led to her first work in local communities and an increasing interest in the burgeoning Theatre-in-Education movement. She began writing on it for the Times Educational Supplement and went on to co-edit a Directory of the movement; to be commissioned to report on the field for the Arts Council; and to edit three key anthologies, gathering scripts and teaching resources for Infants, Junior, and Senior school pupils. As a workshop leader at Oval House for kids from local estates, she began to develop her own projects, increasingly drawing on oral histories as the basis of theatre pieces. This led her in 1983 to the establishment of Age Exchange Theatre company, which, with GLC support, became a major initiative, recording memories of older people as the basis for numerous shows which were toured back to old people’s homes and centres, each show accompanied by a book. In 1986 the company opened the ground-breaking Reminiscence Centre in Blackheath Village. Her growing expertise in the field led to her founding in 1993 the European Reminiscence Network, as well as the old people’s theatre company Good Companions, which she ran till 2005. She has since established a major cross-European study of the use of reminiscence in dementia care: Remembering Yesterday, Caring Today. Pam received an Honorary Doctor of Arts from the University of Greenwich in 2017.

‘To put this thing in its historical context – we’re talking about the early eighties, 1982 to ’83. There was just the beginning of a recognition that reminiscence could be a healthy thing to do. Reminiscence, prior to that, had been viewed as a rather retrograde activity, that you really should be telling old people, using reality orientation, that they are now in St Mary’s hospital and it was Monday morning and it was a rainy day, that they were a hundred years old and that this was Nurse ‘Peters’. So the idea of getting them to talk about the past was ‘No, no they should be in the present and in the future’. But it had been sort of…this concept of reminiscence, of being self indulgent was being re-evaluated. There’d been an American, Robert Butler, who had looked at end of life and had come up with the idea that reminiscence was the way of resolving past difficulties of taking stock of one’s life and that it was a healthy activity.  And so, you know, reminiscence was just beginning.’

A Place to Stay

Bibliography:
Each Age Exchange show was accompanied by a volume of memories and photographs drawing on the same material. See here for a complete list of Pam Schweitzer’s and Age Exchange publications.
Pam Schweitzer’s Theatre-in-Education Archive is held at Rose Bruford College Special Collections.
The Reminiscence Theatre Archive is based at the University of Greenwich‘s Woolwich site.
See also ‘Mapping the Archives: 4’, by Tony Jackson, 1 Aug, 2013 in Research in Drama in Education for details of the Pam Schweitzer archive collections.