Pam Schweitzer received an Honorary Doctor of Arts at the University of Greenwich in 2017. 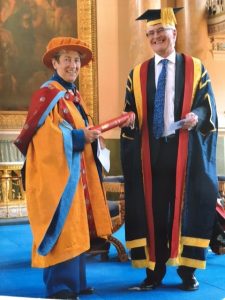 Below are copies of the conferment’s eulogy and response.

Pam Schweitzer is the founder of a unique theatre movement, now known as reminiscence theatre: this is the creation of original shows from the recorded memories of older people.

Today reminiscence theatre is practiced around the world, playing an important role in preserving oral history, and bringing the generations together through creating joyous, moving performances, telling the stories of real people on important themes such as war, immigration and living in diverse communities. Through Pam’s work, reminiscence has also been recognised as a valuable tool in dementia care and the wellbeing of older people.

Pam is an educator, who has always been deeply involved in teaching, research and disseminating knowledge. She has been a valued member of our own teaching and research community here in the Faculty of Architecture, Computing and Humanities since 2005.

Pam was born in Wales at the end of the war but grew up in Manchester. She studied singing at the Royal College of Music before reading English literature, drama and history at the newly-established University of East Anglia. This led to a career teaching English and drama in local schools, including Thomas Tallis and Kidbrooke School (now Corelli). Her approach to drama contained all the ingredients of her later work as Pam facilitated children to draw on their lived experience to explore important issues.

In the early 1980s, as Education Officer for the voluntary group Task Force, Pam first developed an interest in older people and their stories.

She says: “My job was to enable school children and older people to work together on projects. When I started listening to older people’s memories and stories of their lives I thought what good theatre these stories would make.”

An early example was a class of A-level drama students interviewing the residents of a sheltered housing unit. The young people made a script from their memories, including music from the residents’ heyday.

Pam says: “It was a very new idea to make theatre out of memories. We used the actual words of the interviews to make the script, and performed where the old people lived or met.” This use of the original words of interviewees is now widely recognized as verbatim theatre and is often to be seen at venues such as the National Theatre.

In 1983 Pam founded the Age Exchange Theatre and went on to direct over 30 original professional theatre productions. These productions toured nationally and internationally, and each show had an accompanying book of the reminiscences, photos and often an associated exhibition. Age Exchange was the first professional group to use such material as the basis for their work.

In 1987 Pam opened the world’s first Reminiscence Centre in Blackheath village. It became not only a meeting place for people of all generations and cultures, but a centre for professional training in reminiscence.

In 1993 she founded the European Reminiscence Network with partners in 16 European countries and is still the Director after nearly 25 years. The network has led to a rich proliferation, both of new theatre productions all over Europe and learning about the positive effect of participating in reminiscence on older people.

In 2000 Pam was awarded an MBE by the Queen for services to reminiscence. She also won the Lifetime Achievement Award at the National Dementia Care Awards in 2014.

Pam has initiated several action research projects including one called “Remembering Yesterday, Caring Today”, for people with dementia and their family carers. Central to Pam’s approach is to focus on what people can remember and not what they can’t: using objects, music, drama and visual arts to stimulate memories. Pam knows that folk flourish when their memories are endorsed and celebrated.

This project was repeated across Europe, and is widely recognized as life-enhancing for families living with dementia. In 2015 the project was designated a significant ‘success story’ by a panel of experts at the European Commission, who judged the project as being distinguished in its impact.

The experience of immigrant groups in Britain has always been an interest of Pam’s and she has developed shows based on memories of Jewish and Irish elders. Pam is committed to working with the memories of less heard groups who have not always been able to record their lives. She says that these groups should be seen as participants in history and not victims of it. Such work is so pertinent in the current geo-political climate.

After retiring from the Age Exchange Theatre Trust in 2005 Pam became an Honorary Research Fellow in our Faculty of Architecture, Computing and Humanities. However, she continues to direct and produce. She says of a recent show about war memories: “The youngest performer was 82 and the eldest 98. We all had a wonderful time.”

In 2012 Pam established the Reminiscence Theatre Archive here at the University. It contains a complete record of the Age Exchange productions and projects; the scripts, videos, interviews, photos and mementoes.

Pam wanted a safe place for the archive and where there was a sensitivity towards it. It is now used to teach students in history and drama how to digitise and archive, and how to make drama out of memories. Pam is game for the University to make further use of her archive and expertise, for example, with students and researchers focused on health and well-being.

In conclusion, given her international reputation for a unique approach to theatre, health and well-being and her long and rich relationship with the University, it is appropriate that Pam Schweitzer receives this award today.

And now Chancellor, I have the honour and privilege of presenting to you Pam Schweitzer MBE for conferment of the degree, Honorary Doctor of Arts, honoris causa.

Thank you very much indeed for giving me this honour.  It means a lot to me and confirms my commitment to the University of Greenwich. It signifies that I am formally welcomed to the University and that my life’s work in reminiscence is valued here.

I have been involved with the University of Greenwich since the 1990s, giving visiting lectures to drama students on Reminiscence Theatre and Theatre-in-Education. When I left full-time work as director of Age Exchange Theatre and the Reminiscence Centre in Blackheath in 2005, I was immediately made an Honorary Research Fellow of the University. This has enabled me to contribute to the life of the university, slowly building up links and working relationships with students and their lecturers over the years.

I brought with me three assets:

One was the gift of the Reminiscence Theatre Archive to the University. This includes hundreds of taped interviews with local older people, whose memories stretched back well into the 19th century through the stories they heard from their parents and grandparents, a veritable time-capsule. The interviews were recorded between 1982 and the present, as research for 30 professional Reminiscence Theatre productions and countless community theatre projects I have created over the last 35 years.

The archive also contains film footage of the plays created from those memories, and the complete scripts of the plays, together with rare photographs given to the projects by the interviewees. The archive is a rich resource and it is now available to students of drama and history at the University of Greenwich. It has given rise to many new student productions based on the memories it contains, and these productions have gone out to groups of elders in the community and to local school children.

The University has enabled me to digitize the archive with help from students and volunteers, so that much of it is now safe for the future and available to all on-line through its own website. The Reminiscence Theatre Archive will be moved to Stockwell Street in the autumn. I hope it will be well-used there. The memories may be old, but the uses to which they can be put are new and enriching for students from across many disciplines.

The second asset is the European Reminiscence Network, an independent company which has been developing international projects with European Commission support since 1992. As Director of this company, I have been able to engage in international projects and bring to the university many reminiscence practitioners from other countries. I have held training courses, conferences and seminars at the University, linking Greenwich with exciting international work in theatre, oral history, community development and dementia care.

Over the last five years, workers from Spain, Finland, Poland and Germany have been attached through this European Reminiscence Network to the University’s Drama building in Woolwich, helping to digitise the Reminiscence Theatre Archive and build its very accessible website. These European workers have cooperated with students on Reminiscence Theatre productions and enriched the life of the department. They have also helped me to run international training courses and seminars on reminiscence in dementia care, an increasingly important field. The impending loss of this international network and so many other valuable Europe-wide projects through Brexit seems to me incalculable and unthinkable.

The third asset has been my experience in, and love of directing theatre, and especially the kind of theatre which uses the actual words of interviewees to create verbatim plays about important themes in social history. I have been very keen to share this with colleagues and students and hope to continue to do so in future. It is great to work with young people and to see their fresh reactions to the stories in the archive and to this special kind of applied theatre. The energy and enthusiasm the students bring to the work helps me to stay young, although of course I probably look ancient to them!

I want to congratulate all the students who are graduating today (and your proud families and friends). I wish you all the best of luck. I hope you will look back on your years at Greenwich as standing you in good stead in finding fulfilling professional, personal and social lives in the future.

To my friends and colleagues in the University, thank you for making this a memorable day.  Thank you for letting me continue to do what I love best and thank you for having me!

Back to Pam Schweitzer