Zoom Playreadings from the Alternative Theatre Movement
During the pandemic Unfinished Histories is running a regular participatory playreading group reading rare plays from the alternative theatre movement, many unpublished and not seen since their original production, along with New Women plays of the late 19th/ early 20th century. See here for information on sessions planned for Autumn 2021-Spring 2022 and here for  further details of readings so far. If you would be interested in taking part in future playreadings or attending as an audience member, please email contact@unfinishedhistories.com

Her Inside: Women in the Lockdown

In April 2020 Unfinished Histories set up the linked project Her Inside: Women in the Lockdown,  phase 1 which grew out of the playreading group. In November 2021,  Her Inside: Stepping Outside, phase 2 of the project will include workshops developing new material for the blog and a new online public zoom performance Her Inside: Stepping Outside on Thurs 25th Nov at 7.30. Further details including Eventbrite booking link soon!

Unfinished Histories can offer a range of tailor-made workshops, talks and presentations to organisations, venues, universities, colleges and schools, on themes relating to the work and practices of alternative theatre. These are available online or in-person and can include slides, workshop exercises, readings, live performances, as preferred.

For details of some of the subjects available, scroll down this page, for dates, costs and arrangements or email contact@unfinishedhistories.com:

In June 1979 Barrie Keeffe’s play SUS premiered at the Soho Poly theatre, a month after Margaret Thatcher’s victory at that year’s General Election. The play concerned the so called ‘sus laws’, the stop and search powers that allowed the police to arrest people deemed to be ‘acting suspiciously’ or intending to commit an arrestable offence.  Studies have shown that this procedure was disproportionally used against black and ethnic minorities, leading to campaigns such as ‘scrap sus’. More recently current stop and search laws have proved equally divisive and problematic.

On 27th February 2021 Soho Poly Online presented a live zoom staging of this modern classic, performed by a new professional cast in partnership with Unfinished Histories. This was followed by a panel discussion on the relevance of SUS today with members of the original company. Extracts will be available online soon. See here for more information.

Marking the 50th anniversary of the first International Women’s Day march
The first modern International Women’s Day march took place in March 1971. The poster featured Sheila Allen who had two years previously played the Woman in Jane Arden‘s iconic play Vagina Rex and the Gas Oven when it was staged at the Arts Lab Drury Lane, the first WLM play in Britain. The first WLM groups in Britain began that year with the Ruskin College Body Politic conference in 1970. On the IWD march were the Metropolitan Theatre Company – which became the Women’s Street Theatre Group, including (Lily) Susan Todd, Buzz Goodbody and others.

Illustrated talks by Susan Croft, panels including individuals involved in the movement and staged readings from key early feminist plays (or various combinations of the above) are available to book to mark this important 50th anniversary year.
Exhibitions  of posters and other artefacts are also available.  For further details please email: contact@unfinishedhistories.com

Other Recent Talks include: 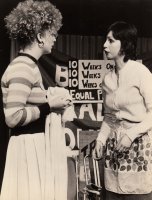 Out! On the Costa del Trico by Women’s Theatre Group (1977) Photo: Lesley McIntyre

Workers, oral history and the alternative theatre movement in the 1970s and 80s and beyond,
at Visions of the workplace: missing from the record, part of Britain at Work (B@W) 1945-95 in association with British Universities’ Industrial Relations (BUIRA) IR History Group and Oral History Society (OHS), Saturday 11 May 2019, 11am – 16.45pm, University of Westminster, 35 Marylebone Road, London NW1 5LS, (opposite Madame Tussauds and nearly opposite Baker Street tube),  Room C279 (lunch C287) Details 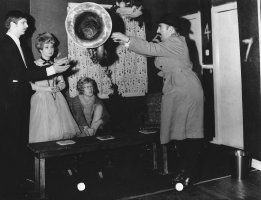 Staged at the old Soho Poly Theatre as part of the University of Westminster’s Difference Festival, Feb 2019, and in 2018 for the 90th anniversary of Westminster Reference Library.
A detailed exploration of alternative theatre history in the borough, copiously illustrated with slides, maps, audio-video extracts and staged readings by actors from selected plays.

If you would like to commission a performance of this event or a version for your city, borough or community please contact us.  Versions already available include Alternative Theatre in Camden, …Westminster, …Hackney, …London as a whole…
For other boroughs, counties or cities these can be organised by special arrangement

Hosted by the LESE TUC  Women’s Rights Committee for International Women’s Day, March  2019.
A talk on how in the 1970s and 80s working women in theatre challenged representations and the roles on offer to them and became campaigners for change, and how women’s theatre companies developed and toured plays to women in factories, one o’clock clubs, community centres, pubs and clubs  to encourage activism, support strikes and present richer, more complex images of female experience. With slides, songs, interview extracts, and archive film.

Unfinished Histories theatre workshops give participants the chance to investigate different creative practices employed by the alternative theatre movement and look at how these ideas can be used to develop performance pieces of their own. Email us for details

We are able to offer talks and presentations on a variety of alternative theatre topics including:

>The history and practices of alternative theatre

>The work of Unfinished Histories

Talks and presentations draw on material taken from our oral history interviews and the archive material we have located and documented. During the pandemic, illustrated talks are available online. These can include audience participation in playreadings, if desired. To organise a talk of your choice, please email contact@unfinishedhistories.com

Training and advice on how to set up and run oral history projects including technical expertise.