Scroll down for memories by: Jude Alderson, Sue Dunderdale and Noreen Kershaw

I had a one year old daughter and a band, the Sadista Sisters. That was a struggle. Jean was, from the off, a loyal friend.

She and I became very close. We saw each other nearly every day and considered the idea of moving in together. But I think Bill ( Oddie) her husband wasn’t so keen on having another toddler running around. (My daughter being younger than Jean’s girls) This was around the time I invited Jean to join the Sadistas. We had been a big success at Ronnie Scott’s and toured Europe particularly Berlin, Hamburg and Scandinavia.   The Europeans seemed to have a better understanding of political cabaret theatre.

The impact of Jean joining us was massive. Jean’s reputation went before her. She had been Lenny Bruce’s warm up act at The Establishment club. She was a renowned jazz singer. A musician’s musician. A very vocal and fierce political activist and she lived in a gorgeous house in the posh part of Hampstead. She was old enough to be my mother, and that was both a joy and a burden. She was probably the cleverest person I knew. Vivid, generous, direct, sometimes to the point of cruelty. I was in awe of her and sometimes scared of her. She was beautiful, principled but infuriating. But she unexpectedly valued my place as an artist a musician and a surrealist.

When on tour in Sweden, Jean and I missed the night bus, it was midnight and minus ten degrees and we were sat in a dismal bus shelter with an hour until the next bus. But Jean always had a gripping story to tell.

She had a huge circle of friends who adored her and who she helped, advised, counselled as only Jean could. Its hard to describe the loss I feel even now. I recall so many ‘Jean’ moments, she was family. I’m lucky to know both her daughters. So, there is some comfort to meet and spend time with these brilliant women who in many ways reflect Jean’s passion for life and social injustice.

Jean was and remains my role model. And her legacy lives on for many many of us.

Sometime in 1977, I walked into a dank basement flat off Ladbroke Grove. I was thirty – the two women I was meeting were ten years younger than me, bouncing off the walls and riffing puns back and forth as if they’d taken tabs. They weren’t on drugs; they were just very young and talented. Melissa Murray and Eileen Fairweather were the writers of a wild, agit-prop play Bouncing Back With Benyon, which had been commissioned to oppose the passage of the Benyon Bill through the Commons. I was to be the director.

The Bill was aimed at curtailing hard-won abortion rights only ten years after the 1967 Abortion Act.  The Women’s Movement organised vigorously against it and Bouncing Back With Benyon was part of that mobilisation. It was a short, wickedly funny two-hander, the performers were Melissa and Jean Hart. We travelled around University unions, women’s groups: anywhere that would have us. The women won, and Sir William Benyon and his Bill failed.

Jean Hart was older than me by about ten years, beautiful, a great actor and singer and deeply political in her life, as well as her thoughts. She’d been a member of the Women’s Theatre Group when they produced Out! On the Costa Del Trico, in solidarity with the striking women at the Trico factory in Brentford. It was 1976, the year after the Equal Pay Act, and the women had discovered they were being paid £6 a week less than the few men on the production line; they were on strike for twenty-one weeks. The struggle ended in total triumph for the women and the union that supported them. The Women’s Theatre Group show was devised from interviews with the women and became a benchmark for their way of working over the next few years.

“Benyon” revealed to me, not only Jean’s genius as a performer but also her huge intelligence, warmth, and passionate dedication to changing the world, especially for women. It was Jean who brought me on board to direct a new Sadista Sisters show, A Cabaret of Sexual and Political Blasphemy. “The Sadista Sisters” was the baby of Jude Alderson, another beautiful and extraordinary woman.  Jude, Jean, and Pauline Melville, together improvised dark and humorous political sketches and wrote and performed vibrant political songs.

The rehearsal period was tough, we fought – but we produced an electric show. From the opening song “Madonna”, led by Jean, in front of a packed audience at the Roundhouse Downstairs, we had a feminist entertainment that was sexually and politically upfront:

“Their act contains all the elements of successful cabaret – a polished, versatile band, powerful songs, three exceptionally accomplished and beautiful front-line performers and an act that is shocking, topical, challenging and hilariously funny. The audience in this cabaret never has a chance to relax but is led by the performers through a gothic show that upturns expectations yet is also remarkably loving, that walks a tight-rope between the mush of titillation and the mire of the grotesque, so disturbing to an audience that it is no longer funny.”

After the show opened, Jean and I went our different ways but I kept in touch with her, visiting her home in Southend Green and in our later years bumping into her and chatting in our mutual haunt of Kentish Town. She was an icon of my younger years and I know she went on to have an enormous influence on the students she taught at Rose Bruford. Her life and talent had a distinctive influence on the early development of women’s theatre, she was a courageous and inspiring pioneer.

Legend that was Jean Hart .

A trail blazer … fierce and funny …a one off independent and kind comrade who was so supportive to other women .

I got to know Jean when she was in the wonderful Sadista Sisters and I was in Bloomers .

Our paths crossed many times and for that I am grateful . 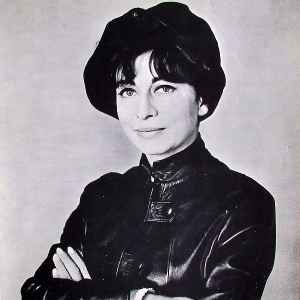 Jean Hart
Their histories are beacons for the present and the future. By capturing the voices and the dreams that laid the foundations of the theatre today, this project will provide an invaluable resource for theatre artists, policy makers and scholars.~Jatinder Verma