Malcolm was a hugely inspiring individual. In later years he taught theatre design at Nottingham Trent University, where he became Professor, bringing fire, creativity and fierce commitment to building a department of international standing. He had started as a director with Portable Theatre, the new writing company, running it as Portable Theatre Workshop and then Paradise Foundry, commissioning ground-breaking new plays. In later years he was instrumental in building contacts in Eastern Europe and bringing over artists to collaborate and work in Britain. Along with Stephen Lowe, Michelene Wandor paid tribute to him in The Guardian saying ‘’Malcolm Griffiths saw no conflict between formal experimentation and politics’.
You can read the full obituary at:  Malcolm Griffiths’ Guardian obituary 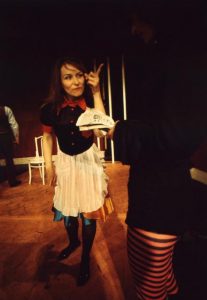 If you worked with Portable or with Paradise Foundry in the early 70s and can tell us more about the companies, Malcolm, and those days, please contact us. A Paradise Foundry Company page is in progress. We would love to hear from any potential contributors.