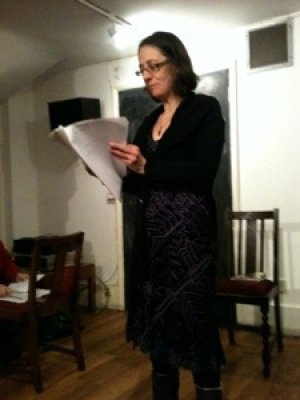 Nandita Ghose was a playwright, poet, radio producer and director and an inspirational teacher. Born in 1963 daughter of Bengali father and a white British mother, Nandita, known as Nanda, grew up in Seaford and went on to study Theatre at Dartington College of Arts. In 1986 her play Ishtar Descends was joint winner of the first Second Wave Young Women Playwrights’ competition and was produced at The Albany Empire.  It drew on the ancient Sumerian myth of Ishtar’s search for her lost lover Tammuz to explore a contemporary young woman’s confrontation with grief and madness. She went on to write Land for Rotherhithe Theatre Workshop and was then commissioned by Red Ladder in Leeds to write Bhangra Girls before starting to work for BBC Radio Drama and later the World Service and Whistledown, producing, script-editing and directing, creating adaptations and working with others to develop their work, and in recent years producing podcasts on young people and HIV for Turtle Key Arts. She advised companies on creating more complex British Asian characters and increasing diversity in their work and  Her original work for radio included the play One Thousand Days, One Thousand Nights, Resistance, So Beats My Heart and Hanuman’s Child, where she drew on the trickster monkey god of Hindu mythology to explore her interest ‘in the here-and-now, being in this country and being from two places and not having a language to describe that…. I don’t fit neatly into a ‘post-colonial’ category. I’m half-English, so I’ve got coloniser and colonised in me; I can see it from both perspectives’, as she discussed in a 2001 interview for The Necronautical Society. She also adapted work by Ruth Prawer Jhabvala, Meera Syal and Rabindranath Tagore. As producer or director she worked on the award-winning series Tommies about the First World War, Time’s Up and original plays by writers including Winsome Pinnock, Lou Ramsden, Vanessa Rosenthal, Julia Pascal, Georgia Fitch, Tanika Gupta, Jez Simons and Jyoti Patel, Lavinia Murray and Hannah Khalil. (For more information about Nandita’s radio career see here) An inspirational teacher, Nanda worked both at London Metropolitan University and community settings like the Working Men’s College and in 2018 was Writer-in-Residence at Gunnersbury Park and Museum, writing poems for a sculpture trail and site-specific  work for the 18th century bathhouse.
She fought a long struggle with bipolar disorder, but took her own life on 18th August 2020. She is survived by her mother Daphne, brother Sumi, sister Katie and son Karna.