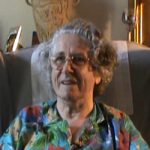 Bette Bourne was brought up in Hackney. He studied drama at Central School of Speech and Drama in London and went on to act on stage and television throughout the 1960s. In the early 70s he became actively involved with the GLF (Gay Liberation Front) which led him, for a time, to live in a drag commune in a Notting Hill squat and leave theatre. In 1976 he saw the outrageous New York-based gay cabaret group,  Hot Peaches in The Divas of Sheridan Square at Oval House and went on to perform with them in Europe and London. After the company returned to the States, Bette set up his own gay theatre troupe, BLOOLIPS, beginning with Just Myself at Hampstead Town Hall in 1977. BLOOLIPS, with their irreverent, colourful, camp drag, toured successfully in the UK and the rest of Europe throughout the 1980s and early 1990s, winning an Obie Award (Off Broadway Theater Award) for the New York production of Lust in Space. From the mid-1990s Bette returned to other theatre work, including playing Lady Bracknell in the English Touring Theatre’s production of The Importance of Being Earnest, for which he won a Manchester Evening News award, performing in Neil Bartlett and Nick Bloomfield’s production Sarrasine at the Drill Hall and Lyric Hammersmith, and playing his friend, Quentin Crisp, in Tim Fountain’s play, Resident Alien, at the Bush Theatre and then on tour around the world, including New York and Sydney. More recent acting work has been at the National Theatre, Donmar and RSC. In 2009, he talked about his life in A Life in Three Acts at the Traverse Theatre, Edinburgh, in a staged reading of transcripts of conversations with playwright Mark Ravenhill.

For further details and images of BLOOLIPS work visit the company page.
Below are some extracts from Bette Bourne’s interview – a full account of the topics covered in his interview can be accessed at Bette Bourne’s Topics List page.

‘I liked ‘queer’ when it came back cos ‘gay’ at the time – at the time I joined Gay Lib – I was one of those men that used the word ‘queer’, cos that was my period, you know; all these queers out there havin’ a good time so… Then I got into Gay Lib and ‘queer’ was not on any more, it was ‘gay’. And then in the punk sort of period ‘queer’ came back in and it seemed to me so grounded and so real, I loved it and people saying, ‘Why are you saying ‘queer’ again?’ – my family especially. I said, [POSH ACCENT] ‘We’ve reclaimed it’, you know… And I like ‘queer’. I like ‘queer’ cos it upsets people a bit and even kids know what it means; it’s like having nail polish on, they just know. Like ‘Bette’, they know. I don’t have to say anything else when I’m introduced to people. And you can see them sort of going like that a bit – and then they have to get over it!’

Divvying up the money

Back to Interviwees A-E
Back to Individuals