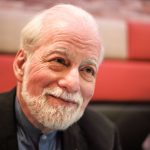 ED Berman MBE has had a huge impact on British theatre and the wider culture. In 1968 he set up the organisation Inter-Action Trust, which in 1984 became Inter-Action Social Enterprise Trust. It became the umbrella for all his activities which included a series of theatres, at least six theatre companies, innovative community festivals and seasons of plays, making print and radio media accessible to local communities, establishing the first City Farm, the first community architecture service in Europe and numerous other projects. Inter-Action commissioned the first community arts resource centre in Europe which was purpose-built on a bomb-site in Talacre Road, West Kentish Town, London, designed by Cedric Price.

It influenced the work of numerous other community arts initiatives as well as direct off-shoots in Milton Keynes and Leeds as well as 80 City Farms and CommunityGardens. In 1985, ED and the Trustees decided to divide the charity into national and local functions, with ED and the senior Inter-Action members moving to the Royal Victoria Docks with the others staying in NW5, renamed ‘Interchange’.  Later Interchange benefited from ED Berman’s contract with the Local Authority to realise £2m which it used to purchase HampsteadTown Hall.  Parallel to this, Inter-Action bought two ships on the Thames in the City as its new national and international centre, opened by HRH The Princess Royal.

ED Berman arrived in Britain as a Rhodes Scholar to Oxford from Harvard in 1962.  In London from 1966 he continued his work on developing the theory and practice of inter-active games —the Inter-Action Creative Game Method– working with young people, actors and community groups in West London around Beauchamp Lodge and Notting Dale. He created his first community theatre piece,  Beowulf, staged on a barge with young people on the Regent’s Park Canal   Around this time he met Clive Barker, who was teaching at WarwickUniversity and developing his own theory of games. Their work influenced each other, though ED’s was more focused on the psychology and creativity of individuals and groups generally and Clive’s on theatre games. Clive Barker served on the Board of Inter-Action from its founding in 1968.  Berman’s own first five plays were produced in 1967-68 by the International Theatre Club (The Mercury Theatre in Notting Hill).  The group which formed around these plays decided to leave with ED and Naftali Yavin to establish two new companies within the newly formed charity, Inter-Action Trust.

The Ambiance was central to the lunchtime theatre movement that became a burgeoning site of new writing development and staging, from the late 60s to the early 80s. Inter-Action’s Ambiance Lunchtime Theatre Club started in 1968, downstairs at the Ambiance restaurant in Queensway, initially in conjunction with Theatrescope and went on to produce a huge innovative programme of short plays by authors including  John Arden, Heathcote Williams, James Saunders, Howard Brenton, Harold Pinter and Tom Stoppard. It introduced numerous writers from the new experimental theatres that had emerged off-Broadway in the 1960s. The Ambiance moved on to do seasons at the Green Banana Restaurant (run by Norman Beaton), the ICA and the Oval House (1970).

In 1971 ED Berman moved the Ambiance to Rupert Street in the West End where as the Almost-Free Theatre (audiences paid what they could afford—at least one penny) it staged seasons including the first season of gay plays in Britain, the first women’s season, readings of John Arden and Margaretta D’Arcy’s controversial The Non-Stop Connolly Show (1976) on Irish politics, along with a Jewish season, an anti-nuclear one and a season to mark the 1976 American Bicentennial as well as numerous individual new plays by Mike Stott, Henry Livings, Michael Stevens, Wolf Mankowitz, Edward Bond and many others. Tom Stoppard developed several of his key one act plays for Berman’s theatres including After Magritte, Dogg’s Hamlet Cahoot’s Macbeth and the highly successful Dirty Linen and New-Found-Land which transferred from the Almost Free to run for four-and-a-half years at the Arts

ED Berman programmed Britain’s first season of plays on black issues: Black and White Power Plays as a season at the Ambiance-in-Exile, at the ICA in 1970. The season introduced the work of African-American playwrights like Ed Bullins and LeRoi Jones, alongside work from white playwrights on Black issues by David Mercer and Israel Horovitz. It also commissioned Mustapha Matura’s first play Black Pieces. Roland Rees who directed some of the plays in the season went on to introduce the work of many more new black British playwrights with his company Foco Novo.

The 1973 Women’s theatre season introduced work by American writers including Sally Ordway and new British writers such as Pam Gems, Michelene Wandor and Dinah Brooke. Women directed, stage managed and administered the season, helping many of them develop their professional careers. The season led to the formation of the influential companies: Women’s Theatre Group and Monstrous Regiment.

The 1975 season of gay plays, including work by Robert Patrick, Martin Sherman, Laurence Collinson and Alan Wakeman, was the first to be staged in Britain. The season led to the formation of gay theatre companies, principally Gay Sweatshop, Britain’s first gay and lesbian theatre company.

NB: The three seasons above were established by ED Berman through a caucus with individuals who identified with each theme.  They then worked out the various roles themselves shadowing the Inter-Action staff where necessary.

Dogg’s Troupe staged street theatre and community events and performances on local issues and larger concerns, working especially with children and families, as well as in hospitals, old people’s homes and other community venues. Berman played the role of Professor R.L. Dogg or Otto Premiere Check (and with the Father and Mother Xmas Union as Super Santa). As well as creating events the Troupe also continued the games work with local kids and training a wide range of groups from across the country.

The Father Xmas Union (‘FXU’) was set up in 1969 to stage large-scale social and activist events such as the protest by hundreds of Father and Mother Xmases against the use of non-union labour by Selfridge’s (for which they were arrested) and the delivery in 1978 of a piano with the black keys removed to the home of a National Front candidate in the local borough elections. The Union was open to all and it also staged anti-nuclear performances. It attacked the demonstration of the use of real weapons by the British Army at the Christmas Grotto of Barker’s department store.

TOC (The Other Company)

The Other Company was set up by Ed Berman and the innovative Israeli director, Naftali Yavin, in 1968. Drawing on role-playing and applying psychological games theory in a theatre context, it created powerful, often environmental, physical pieces and was especially acclaimed for productions of works by Peter Handke and James Saunders and work on dysfunctional families. Tragically Yavin died in 1972.

In 1972, a Routemaster bus was specially converted to create a small theatre on the upper deck, along with a cinema showing short films and slide-shows downstairs. The sides were brightly painted with slogans and pictures of the passengers on the upper deck. The legendary Fun Art Bus stopped at bus queues where mime shows entertained from the ground floor windows, the bus driver played the electric piano and then took passengers on free tours; it also visited community festivals, and toured the UK and Europe. The adverts were cartoons, there were sculptures in the luggage compartment and the tickets from the clippie were poems by such poets as Roger McGough and Adrian Mitchell.  Numerous writers wrote short plays which were performed by TOC and the Dogg’s Troupe.  Observers from high rise offices and housing were able to ‘join in’ a picnic painted on the roof. Disembarking passengers received paper models of the bus which they could cut out and Alan Brownjohn’s The Big Red Bus Book.

ED Berman negotiated with British Rail to take over several tracts (10,000 acres) of British Railway land which were unusable for development under modern planning legislation because of their proximity to the railway lines. Inter-Action established the first City Farm in Britain in KentishTown, north London, in 1971.  Originally called the Fun Art Farm it rapidly became a model for city farms which sprang up across the country. The new Inter-Action Centre at Talacre was the first home of the National Federation of City Farms and CommunityGardens: there are now 1200 city farms and community gardens across the country. As with most of Inter-Action’s projects, ED Berman put great emphasis on information using activities as a model that could be recreated elsewhere with Inter-Action publishing ‘How To…’ guides with its publishing company, In-Print, to encourage initiatives elsewhere.  This National Association and its grants were devolved within a few years to a democratically elected lead group. Inter-Action no longer played a role in the movement except for running City Farm I—this policy of completely devolved independence characterised ED Berman’s approach to community work.

The members of Inter-Action lived and worked collectively, an early environmentalist experiment. As the organisation grew, ED negotiated to take over short-life housing from Camden Council. The members, including ED, lived communally in shared buildings and were paid equal wages.

Numerous other activities including the establishment of WAC- the Weekend Arts College, the first Community Media Van, a community print shop including the publishing arm, Inter-Action In-Print, a film company, Infilms, a free school and a plethora of computer projects from the 1980s onward; then two more theatre companies: the Old Age Theatre Society (OATS) working in old people’s homes and the British American Repertory Company (BARC),

the first joint company approved by both Equity Unions and both countries for non-star actors and stage staff.

ED Berman became a British citizen in 1976and received an MBE in 1979. He has worked in Hong Kong, Germany, Holland, Norway, Sweden, South Africa and India as a Director/Trainer as well as advising on developing new social enterprises.
In Russia he worked as an Adviser to three State Ministers and in the UK as a non-party-political Special Advisor on Inner City Matters to Cabinet Ministers, Michael Heseltine and Tom King. Among other actions, he has been the Chairman of the successful Save Piccadilly Campaign (to stop the high rise office development surrounding the Circus) and the action against JP Morgan to open their blocking of a walkway/cycling path of the Thames Walkway on the Isle of Dogs.  He continues to spend part of each year in India, advising on social enterprise projects, mainly with women, and environmental projects, especially water development.

He was elected Chairman of the Rhodes Scholars in Britain charity in 2014. In 2014 he was appointed a Mayor’s Champion for Canary Wharf. Also in 2014 he was elected Co-Chairman of the largest Neighbourhood Planning Forum in the UK which is located on the Isle of Dogs. In 2015, the Massachusetts Institute of Technology invited ED to establish Fab Foundation UK which has been successfully launched. He founded this with three other Trustees, Bhaskar Choubey, Professor of Engineering at Oxford; Harvard MBA Steven Watson and Frits Hoff, Chair of the BeNeLux FabLab Foundation.