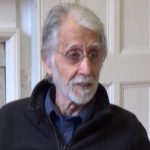 George Eugeniou is a poet, writer, actor, director and campaigner. Born in Limassol, Cyprus, he moved to London in 1950. After training as an actor at Webber Douglas and working in repertory, he joined Joan Littlewood’s Theatre Workshop in 1956. Her use of professionals, semi-professionals and amateurs inspired him to start a theatre company for the Greek Cypriot community in London – Theatro Technis. The company performed in a variety of often unsuitable premises until after many years of campaigning and always continuing to make theatre – the current premises of Theatro Technis in Crowndale Road were acquired for the company by Camden Council. As Artistic Director, Eugeniou often directed and occasionally performed in a staggering range of productions. Initially performances were often in Greek or sometimes bilingual. More recently they have broadened out to become more international – establishing especially strong links with the Black community. As well as performing classics such as Antigone and The Bacchae, there is also an emphasis on contemporary writing – dealing with issues of migration, political injustice, xenophobia and racism. Under Eugeniou’s leadership the building has always been central to the community with a particular emphasis on young people’s theatre.

Early years in the ‘garage’

‘We started in 1957, and we collected a group of workers, students, and some actors, and some semi-actors, and we study for two years, we explore creating an ensemble, and eventually in 1959 we did our first show. We used our own rooms first and we used pubs; there was a – it’s still there – the pub in Kentish Town, The Assembly Rooms, we used that very, very often. We had a basement in Eversholt Street. We hire a basement, and then a café in York Way near Kings Cross. And eventually one of the students, one of the actresses who was involved with the group, said that her father had a garage and she could ask him whether we could share it with his car. And she did, and that became our first, little, sort of permanent base. For ten years we had that garage. It was twice as big as this room, it was in Camden Mews – you know, a back street of Camden Road. It was a solution to the problem, you know? We called it,  ‘garage [word unclear]’ where we did small events and continuously, sort of gatherings, meetings about Cyprus, and also about in 1967, there was dictatorship in Greece, the coup, and we had a lot of Greek political exiles, and we started doing activities against the Junta in Greece.’