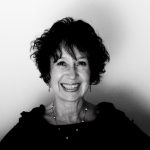 Norma Cohen was born in Liverpool and moved to London aged 16. She qualified as a  Laban-based dance teacher, teaching movement and drama, choreographing shows in comprehensives and for the Woodcraft Folk. She met Sara Boyes whilst working at Woodberrry Down School who invited her to join the newly formed Sidewalk theatre company, then based at Oval House. Cohen brought skills in mime, clowning and comedy to their work. The name of the company suggested people ‘taking their own path’ and they were committed to presenting accessible theatre on contemporary social issues, especially to young audiences. Their work was taken to playgrounds, schools and community centres, but their most successful piece was the company’s first play for adults Son of a Gun written by John Burrows, which toured conventional theatre spaces in Britain and Holland. Cohen performed with a number of other alternative theatre companies including Cunning Stunts, Monstrous Regiment, Pirate Jenny and at the Albany, Deptford. She also performed as a stand up comic on the CAST New Variety circuit set up and run by Roland and Claire Muldoon. Over the years she has written and performed in her own shows such as Sympathetic Magic, Oy Vey Fung Shway  and Cleansweep with her own company: Ship of Fools, using them in community and workshop situations. As a director/choreographer, she worked for Pop Up and Quicksilver. Cohen has also worked extensively as a freelance arts journalist inc: Dance Editor TES and Health Editor City Limits and as a writer (novels, non-fiction and plays).
Cohen currently works as an actor and writer and runs Vital Sparks workshops. Her recent theatre work includes performing in Who Do We Think We Are? with Visible Ensemble at Southwark Playhouse, in Yarning by Trevor Pitt at Birmingham MAC, The Wardrobe Project (Visible, 2016), DUSK, a site-specific work by Catherine Willmore (Epping Forest) and the 87 year old Countess in Pushkin’s Queen of Spades directed by Max Hoehn (Arcola). She also played Rika in Gail Louw’s comedy hit Two Sisters for a South East tour ending Upstairs at the Gatehouse. Following a rehearsed reading of her play Gone for a Burton (formerly No Reasonable Offer Refused) at the Park Theatre, Jake Murray directed a staged reading at JW3. She has just finished two novels. Via her creative workshop organisation Vital Sparks developing interview and presentation skills, she comperes and works with poets (The Rest will Follow spoken word salon), first-time novelists (www.novellondon.co.uk) and actors, helping people deliver their work to an audience with flair.

For further details and images of Sidewalk’s work visit the company page.
Below are some extracts from Norma Cohen’s interview – a full account of the topics covered in his interview can be accessed at Norma Cohen’s Topic List page.

Work of the time

‘It was just [like] being thrown into a very exciting world – it was the antithesis of my structured boring-ish teaching world, and I wanted nothing more than to do it all the time really. It was the sense that you could do anything – maybe that was the time as well, it was the end of the Sixties – you had the feeling  of your life ahead of you – any creative or political or community thought – you could do it, you could carry it out, there weren’t the terrible blocks that I see now with my own daughter in terms of finances, education, housing – somehow we got by – but there was a sense that collaboration was easy – there was a lot of cross-fertilization. I worked with loads of different companies: Monstrous Regiment, Pirate Jenny – touring companies, puppet companies. There was a company called Bread and Roses who came from America. People had different threads: Freehold, was a movement and classical-based theatre, so that was their brief: doing amazing, visual stuff. There was stuff that was much more challenging: Red Ladder was doing issue-based theatre. Sidewalk started by doing Norse legends – it was very much folk-tale based and after the Brecht play [Exception and the Rule], we went on to create and write a lot of shows. Anyway when we got funding there was the Arts Council brief that things should have an overt community edge.’

Son of a Gun

Norma Cohen and Guy Holland were interviewed together in 2013 about their work with Sidewalk. To see what was covered in the interview visit Guy Holland’s web page.