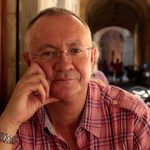 Below is an outline of the topics covered in our interview with Chris Hauke in 2013, recorded to assist with the construction of the Bubble Theatre company webpage.

Interview content includes: Bit about pre Bubble work with Freeform and Curtain Theatre. Working with Bubble as a musician and actor two seasons both ‘77/’78. Wide range of work/music opportunities. Key people from those years: Steve Warbeck [later gained as Oscar for his score on the film ’Shakespeare in Love’], Gemma Jones [since become a very successful production designer including seasons 1-3 of ‘Game of Thrones’] , Ian Milne (MD) and Brett Morgan [of famous ‘70s Morgan Studios]. Glen Walford – how she worked and what she wanted from actors. Shows devised collaboratively, then director-led. Contracts from late May- Sept, company of 20 performers + 15-20 crew. Bubble aims and relationship with audiences. Other people: Wendy Morgan, Kate Saunders [who joined as an actor aged 17 and later became a best-selling author]. Chris Hauke left to do other things then picked up again in 1984 as ASM – hard work, putting up the tent. Also did volunteer work at Albany as was living with John Turner and Jenny Harris. Part of Rubber Johnnie band [John Turner’s group] Bubble band played at Albany fire benefit held at the Roundhouse Camden [where Bob Hoskins gave a supporting speech]. In ‘I Should Coco’ band [Dave O’Donnell’s group]. Music with John Turner & Rick Lloyd of The Flying Pickets. Thoughts on alternative theatre, where it came from. Politics of time, pressure to be ‘Right On’  [which was the term for positive political correctness at the time]. Bubble showed theatre could be fun and involving. Presence of Bubble allowed venues like the Almeida and Donmar to happen.