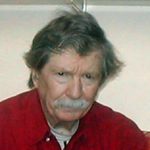 Born in Haynesville, Louisiana, Jim Haynes attended Georgia Military Academy and then Louisiana State University before enlisting in the airforce where he requested a posting at ‘the smallest possible military base, near a major city and university’. Posted to Kirknewton near Edinburgh, he rapidly became involved in the cultural life of the city and on leaving the air force in 1959 set up the first paperback bookshop in the city and developed its basement to stage arts events. In 1962 he co-founded the Traverse Theatre as a space for innovative new plays running it till 1965 when he moved south to set up a Traverse Theatre, London, a critical success but financial failure at the Cochrane. Taking the lease on two adjoining warehouse buildings in Drury Lane he set up, with Jack Henry Moore, the Arts Lab, an innovative and hugely influential venture combining cafe, visual arts, music events, films and performances, the starting point for many other arts labs around Britain and for numerous companies. He also co-founded alternative publications including IT (International Times) and SUCK a magazine of sexual freedom. In 1970 he moved to Paris to teach at University of Paris 8 in Vincennes and settled there, continuing to publish. In the early 70s he established a regular Sunday night salon at his apartment which rapidly became legendary and continues to take place.

The Traverse Theatre in the 1960s

‘Well the nice thing about the Traverse at that time, in the sixties, there were still not a lot of places open. You know, Sunday drinking and late night drinking, eating, you didn’t have an enormous choice. And the Traverse, in the Royal Mile,  right up by the castle, was a little oasis which everyone came to. It was like a magnet pulling them. And so you’d have in the restaurant, in the bar, an unbelievable  cross-section of creative energy and it really became the centre of the [Edinburgh] Festival for a number of years.  I think now it’s lost that although I was in the Festival this year [2009] and it was amazing to see who was in the Traverse bar. But there’s choice now, then there was no choice and that was the big difference I think… I tried to create a school of local playwrights. When you realise that there were no real Scottish playwrights in those days. I mean there were very, very few. There were novelists, there were poets, there were folk singers, there were essayists, but no playwrights. And the Traverse produced an incredible…like every third person in Scotland now is a playwright you know – it’s not quite like that – but an incredible number of Scottish playwrights. That I saw as the aim of the theatre.’

How it all began at The Paperback Bookshop