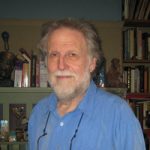 Neil Hornick has worked as a writer, director, actor, performance artist, lecturer and archivist since the mid-1960s. By his own admission he was a ‘prankster’ from his mid-1950s schooldays when he staged self-styled ‘experiments in rearranged reality’ in classrooms, streets and tube trains.  After gaining a degree in psychology at UCL, he dropped out of a PGCE at Goldsmiths, busked his way around Europe in a folk-singing duo, and travelled on a year-long overland expedition to India. Returning to the UK he enrolled on the PG Drama Course at Bristol University where he was given the space and encouragement to develop his own non-naturalistic ideas and techniques. Neil became involved with the late 60s London counterculture scene – joining Charles Marowitz in running an experimental workshop and writing for Inter-Action’s Ambiance Lunch-Time Theatre and Fun Art Bus. Following creation of a satirical Vietnam War revue, The Gang Bang Show, which played at the Roundhouse during Angry Arts Week, 1967, Jim Haynes offered a workspace (soon to become the Drury Lane Arts Lab) to Neil’s group The Troupe (later The Switch).  Neil next toured with Beth Porter’s Wherehouse La Mama, then founded The Phantom Captain in 1970. The company’s work evolved largely through improvisations and brainstorming, though not to the exclusion of written texts, and was informed by dada, surrealism, zen, pranksterism and ‘third force’ humanistic psychology. American Joel Cutrara became Neil’s closest collaborator for fifteen years. Their work encompassed critically acclaimed stage plays, audience-immersive ‘environ-mentals’, infiltrations, slide shows, drama/encounter workshops, street theatre and performance art, staged in a varied range of venues and festival sites in the UK and abroad, including New York and Moscow. The company’s 36-year run came to an end in 2006. Neil is also a literary editor who runs his own script consultancy (‘Reading and Righting’) under the pen name Robert Lambolle.

For further details and images on the The Phantom Captain’s web page.

Below are some extracts from Neil Hornick’s interview – a full account of the topics covered in his interview can be accessed Neil Hornick Topics List page.

‘I think the piece did achieve more of a Performance Art quality than perhaps anything else I’ve done before that …. David [Gale] brought his art school sensibility into the piece and I was sympathetic to it for sure and I was glad to direct the three of them and develop the piece into something that didn’t have a very long shelf life. It did go on tour, in an Arts Council package, but wherever it went it did have impact. I think, though I say it myself, it was a very, very beautiful, strange and bizarre piece with very effective use of music – Albinoni’s  Adagio  for Strings – it had class that piece. It lacked some of the rough edges, the coarseness and vulgarity of some of our early pieces – maybe that’s something that David brought to it, I don’t know. Ian Johnson who was in it and became a regular member as well as director of the film about our work, he’d come out of art school as well, so I think it had a very powerful visual quality and it was recognised as such. It wasn’t something that made the national newspapers. I watched it often in the audience and there were others – people like John Ratzenberger from  Sal’s Meat Market would watch it and really appreciate it. I remember overhearing John Ratzenberger, who had a successful comedy duo at the time – before he joined the cast of Cheers – turning to a friend of his and just saying ‘Wow! Beat that!’ while the show was going and I felt really, really proud. But it was  a collaborative piece and I certainly don’t want to claim all the credit for it because it was, I think, David’s artistic input as well as Cindy’s [Oswin] and Ian’s that made that. I think it was a Performance Art piece firstly in that it had little or no dialogue. There was perhaps one speech or two, so it wasn’t pure mime. It put great stress on the evolving drama of the visuals. It had a strong, a very strong visual component. It also included passages in slow motion and extremely bizarre elements that would have come out of our joint interest in surrealism, that you could not describe as a play nor was it street theatre – there was no audience interaction invited or accepted….so that it became a kind of bizarre ritual or spectacle – strongly visualised and strongly lit in a way that confounded all rational explanation but which no doubt expressed a great deal of the psychodynamics of the people involved in preparing the piece, which evolved entirely out of improvisation. The only concept that we started with was food ‘cos we knew that we were going to perform it in a supper club-type place which is what the Howff [Theatre Café] was in those days – people sat at tables and ate and watched a show.’

Links:
The Dialectics of Liberation Redialed

See here for further details of Neil’s first show The Gang Bang Show (1967), revisited from the perspective of 2014, a vaudeville style piece about the Vietnam war, performed as part of Angry Arts Week at the Roundhouse Annexe.

Bibliography:
For Neil’s and The Phantom Captain’s full bibliography link here, their filmography here and audiotapes here
His Archive was acquired in late 2022 by the British Library. For more information see here