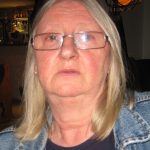 Sue Imerson (1952-) was a member of The General Will from 1975-1977. She got involved after seeing the company’s shows: she was a factory worker at Lister Mills silks factory and part of radical political activism in the Bradford area. She worked on maintenance and building support as well as show creation.

Interview precis + timings: Born 1952; Imerson joined later – no memory of David Edgar in the company (:42) remembers Noel Greig being part of General Will and remembers after he left; joined about 1975; became involved through the community; introduced to Dusty, Bobby, and Johnny through Denise Speight (?), who wrote several shows that Imerson performed in (1:39);  working class background/working in a mill; whole new world opened up for me after growing up in an insular town (2:21);  race and class diversity after growing up in a small town (3:13); employed by the company after it became an umbrella company for the community (4:15); ACGB funds to pay for petrol/diesel; working taking care of the van, building a music workshop in the cellar (4:45); wasn’t like being in job with fixed hours per day—variety of tasks, thinking of songs, working on posters; evening, all out drinking together (5:50); nature of umbrella organization and the gay takeover (6:15); encouraged to apply for admin by Noel Greig, became successor to Carol Moss as administrator; job for a year, but then involved still after while unemployed; company became an animal that turned back on itself, lesbian takeover meeting, abrupt end of company (8:47); conflict about trying to control the resources in an exclusive fashion, didn’t sit right because it was no longer about the community (10:20); people were drawn to Bradford because it was so amazing and radical, then people think they should be in a position to control those things and that destroys it (11:20); misses the Bradford that made General will possible (12:25).