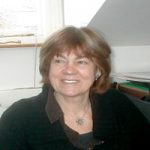 Andrea Montag trained as a theatre designer at the English Opera Design School under Margaret Harris (Motley). She worked for two years at the Northcott Theatre, Exeter with Artistic Director Jane Howell. Her first show in London was the highly successful Female Transport at the Half Moon in Alie Street, E1 with director Ron Daniels, with whom she went on to work at the RSC’s Other Place. She went on to work with other alternative theatre companies including designing Monstrous Regiments’ first show Scum and went onto design Vinegar Tom, Calamity, Yoga Class and A Common Woman for them . She also worked for Black Theatre Co-op (Waiting for Hannibal, A Raisin in the Sun), Foco Novo (Deathwatch, Banged Up), National Theatre of Brent (Zulu), Temba (A Visitor to the Veldt, Killing Passion, Romeo and Juliet) Talawa (The Black Jacobins) Tricycle Theatre (Ever After, Dick Sheppard’s Back, Love in Vain, Nightshoot, Two Can Play). She has also worked in many regional theatres including Sheffield Crucible, Contact, Manchester, Liverpool Everyman, Leicester Haymarket, and the RSC. Since 2004 she has been Head of Design at Bristol Old Vic Theatre School.

‘It was a very conventional theatre and amazing because of that, because it was a huge stage, which for a first job was incredible to work on, it wasn’t fringe by any means. But it was Jane Howells, who was a really exciting director, and as I said, her writers in residence were Edward Bond and Howard Brenton. We had the most incredible actors starting out there, Bob Hoskins, Bob Peck, Bobby [Robert] Lindsay, and for two years the most exciting work was done there. Politically it was very exciting, I mean the council did use to check them out quite a lot, you know, they’d heard rumours we were doing something dreadful and they’d come and check it before the audience came. But it was a very exciting two years and for me I just learnt how to design there really. Haydn Griffin was the Head of Design who taught me, but I also thought he was incredible. And I did a lot of TIE so you kind of learnt it all right from the bottom until I did main stages with Jane as well.’