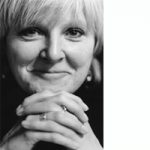 Bryony Lavery has an extensive career as a playwright for stage and radio. She trained as a teacher and worked in arts administration before forming the company Les Oeufs Malades with Jessica Higgs and Gerard Bell, who performed her first plays like Sharing and Bag. She went on to set up the feminist cabaret group Female Trouble and wrote (and performed in) several of the Drill Hall women’s pantos, as well as plays for Monstrous Regiment, Sphinx / Women’s Theatre Group, Theatre Centre, and many others. Among her many plays are: Origins Of the Species, Witchcraze, Calamity, Her Aching Heart, Goliath, Frozen, A Wedding Story, Last Easter and Stockholm.

‘I was then getting work with companies, particularly Monstrous Regiment, but also the Women’s Theatre Group I did a couple of shows for, and just being very aware that there was this explosion of furious women who suddenly realised they had the minor parts in men’s work and started making work that had big parts for women. It was very eye-opening because they [Monstrous Regiment] were the most vibrant set of women. They were quite scary at first, I found them quite daunting, and then of course discovered that they were enormously kind and generous and lovely. They were the ones who introduced me to the notion of feminism and how that worked and its contradictions and its pleasures and  pains.’

Female Trouble at the Arts