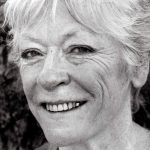 Eileen Pollock was born in Belfast and studied languages at Queen’s University, Belfast. After working briefly as a translator she became an ASM at the Bush Theatre and went on to join the political theatre collective Belt and Braces. Frustrated at the lack of roles for women, she left to co-found the women’s company Bloomers and later Camouflage, for which she wrote a number of plays. She went on to work extensively with companies including Field Day, Charabanc and Dubbeljoint in Ireland and with many other touring and repertory companies in Great Britain. On television she became well-known playing Lilo Lill in the long-running series Bread. She died on 20th December 2020.

Belt and Braces, Dario Fo’s Accidental Death of an Anarchist

‘In it there’s only one woman – she comes in in the second act –she’s  the journalist from, L’Unita, the communist paper in Italy – Maria Felleti – and … there were all these guys, you see, all fantastic fellows and that and great script and everything but they all expected me, because I was the only woman involved, to be their feminist conscience: ‘I’m surprised you let that go, Polly, what he just said…’ to the point where I threw down whatever I was holding and said ‘Why is there only one bloody woman’s part  in this play?’ Which is now in the script!…’