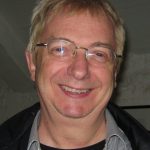 Greg Philo (1947-) was a founding member of The General Will with David Edgar and John Cudmore who ran a theatre group at the University in the early 1970s. An academic and an artist first in, Philo primarily acted and directed for General Will. He relocated to Glasgow in 1973 and joined the University of Glasgow. Now a professor of Communications and Social Change he is also the Research Director of the Glasgow Media Unit.

Interview precis + timings: Founding General Will with David Edgar and John Cudmore; conditions that led to the founding – art college, radical principal of the college, appointment Chris Parr who was fellow in theatre and given a large budget (2:03); Parr who was contemporary with David Hare and David Brenton and he brought them to Bradford, and there was a budget to commission work, 12-13 shows a year extraordinarily productive time (3:01); Philo running a drama group at the university; Edgar a journalist who asks to come write plays, commissioned his first plays (3:40); Cudmore an actor, tour of National Interest, Rupert Show, sequence of high quality theatre (3:20); Philo moves to Glasgow and creates Glasgow Media Group, which was basically a combination of the General Will and sociology (5:10); Glasgow had to reinvent itself as a city because of the collapse of the shipyards (6:08); Philo sustained quite a bit of interaction with Bradford and General Will, came down to direct things (6:30); Bradford was alive with theatre, easy to go back up to Edinburgh doing other shows working for other people, easy for people involved with General Will to pick up other strands too (7:10); Dusty Rhodes working on the Bradford Arts Festival (7:58); Bobby Weaver working on all types of projects; General Will was an attempt to set up a professional theatre that could then apply for funds (8:15); then a more substantial base/buy a van/street cred in terms of artistic development (8:45); General Will an attempt to move out of the amateur theatre of the university, even though that theatre was very high quality (9:25); theatre groups in Bradford—Albert Hunt, John Fox, traveling around to Arts Festivals together (11:05); doing an arts event on the dome in on Lancaster hill;  theatre group in the university was a huge subsidy, it acted as a material base to generate all sorts of activity (12:00); it all becomes difficult when you become professional, not getting paid while rehearsing (12:48); Arts Council grant happened in 1973; one of the reasons to set up the General Will was that people had finished being students (13:30); every radical or lefty thing I’ve been involved with relied on voluntary labor and people move in and out (14:40); being on the dole normal then; things were madly cheap (15:30); audiences were very conscious of the radicalizing agenda of the company, and took the plays very seriously as a way of raising people’s interest (17:20); radical theatre at that time was a version of Facebook, a place for alternative pubic discussions, a way of starting debate (18:15); people loved the work, but you can’t measure it in terms of ‘how many people had their opinion changed’ because you would never know (18:39); we won all the battles of ideas won by the ideas of the left, but the right were never interested in ideas, they were only interested in money. ‘We won the battle of ideas, but they just took the money and that is where we are now. We thought if we had rational arguments, it would be ok. But actually the people in power were never interested in rational arguments, they just took power, they still take the money, and that is what we didn’t understand at the time (19:30); spending too much time on inward looking things, didn’t see these people were going to take over the world; it wasn’t just the theatre or the arts side, it was inter-leftist disputes (22:00); we took the luxury of talking about where we were or what we felt (22:50)’; Philo’s political affiliation was not party based, interested in education and mass media, mass participation (24:20); in Glasgow he learned a lot about to say and how to say it in theatre (25:05); characterizes General Will from 1972-1974 as interested in a particular type of agit-prop in theatre, Edgar wanted to go more into more traditional theatre with multidimensions along the lines of Brecht and confrontational in a different way and not just ‘three funny hats and a song’ (26:00); immediately after me they got brilliant people like Brian Hibbard in (26:35); Prison show a tremendous piece, that and the Pub Show were the best things they ever produced, Philo brought them to the Student Union in Glasgow: a hit, seen by over 1000 people, a knock out period in terms of quality (27:00); so-called ‘gay takeover’ was a decisive move in the ‘ideas’ direction (27:40); change so the role of theatre was to enable people to speak (27:58); Philo understands, but feels the mistake was to say that was the only thing theatre can do and that the people who have been oppressed the most have the right to speak and all the other people are automatically patronizing and oppressive (28:30); going on at the time that the whole left political thing was contracting in the 70s, there was less money, link with the university was cut, the whole dream of the 60s was beginning to fade a bit (29:40); what it looked like to me was a group of people who were on the defensive and were competing for the cultural capital that was left (30:30); that was the basis on which the General Will was taken over and redirected (31:16); Tom Robinson being stopped by radical feminists at a concert (32:04); The Manningham Finger (wagging), nobody could do anything (32:45); learned in General Will about how to hold people’s attention (33:48); got into teaching because there would be 400 or 500 people in a first year class, a captive audience and I could show video, when to do jokes, how to make them laugh, how to make them cry (34:00); it was a phenomenal education in communication (35:20); People need to know how fun it was—the missing thing in histories of the 60s and 70s is that is an explosion of vitality, extraordinary sense of excitement, histories that have been done on it are such appalling caricatures, and intensity was astonishing (36:12).