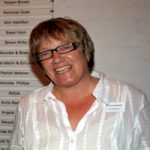 Julie Parker trained at Central School of Speech and Drama and went on to perform in Gay Sweatshop’s first women’s show, Any Woman Can, (script by Jill Posener)  touring Britain and elsewhere. She became a member of Action Space collective in Chenies Street where she helped organise the influential Women’s Festival in 1977. She stayed on to become theatre programmer at the venue and eventually its Artistic Director when it became The Drill Hall, building it into London’s premiere lesbian and gay venue, where numerous hugely significant works have been developed and premiered for over 30 years. In January 2012 The Drill Hall became RADA studios (archive now at London Metropolitan Archive). Julie Parker with Mavis Seaman, now runs Outhouse London, previously Central London Arts Ltd, producing large-scale theatre and community theatre events across London and the UK.

‘Seven days a week, from nine in the morning to gone midnight, this entire building – it wasn’t a theatre at the time, just an old marching hall with staging at one end – was awash with hundreds and hundreds and hundreds of women. We showed lesbian sex films upstairs – educational, of course! Remember this was the ’70s and politically that was where we were at, this was about information. It was very hot and sweaty in those rooms…’

Action Space at the Drill Hall

Links:
www.outhouselondon.co.uk
The Drill Hall archive is at the London Metropolitan Archive.