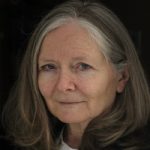 Kathleen McCreery is a performer, writer and director especially associated with political theatre and activism. Born in Canada, she graduated from the University of Minnesota and worked in radio before moving to London. With her partner Richard Stourac, McCreery joined Agitprop Street Players later known as Red Ladder Theatre company and then went on to found Broadside Mobile Workers’ Theatre Company. Within these collectives, McCreery devised and performed work on homelessness, squatting, women’s issues and apartheid – often responding to Trade Unionists suggestions for subject matter. Initially shows were performed outdoors on picket lines, at demonstrations, trade union conferences and political rallies. Broadside enabled their work to become more extended and developed for alternative theatre venues. In the eighties McCreery concentrated on writing and directing and, after leaving Broadside, Stourac and McCreery co-authored Theatre as a Weapon – Workers’ Theatre in the Soviet Union, Germany & Britain, 1917-1934. Now working independently she adapted Mary Barton for Avon Touring and has written for a wide range of community and youth theatres, schools and colleges. A Writers’ Exchange Bursary took her to Zimbabwe, and led to work in Ghana and South Africa – running drama workshops, writing and directing. She is a trained counsellor and has delivered drama and mental health projects for the NHS.

For further details and images of Red Ladder Theatre Company and Broadside Mobile Workers’ Theatre  visit these company pages.
Below are some extracts from Kathleen McCreery’s interview – a full account of the topics covered in her interview can be accessed at Kathleen McCreery’s Topic List page.

‘And I think the other really important thing about Broadside was that the discussions which we had started with Red Ladder, they really developed, and we got very good at leading discussions in such a way that they really were creative events and where we became very good at stopping the professional politicos from coming and dominating the proceedings. You get these people who were so used to talking and who had lots to say. Often they had a political party agenda and we got very good at stopping them and very good at making links between the ideas that were coming up. We would see somebody’s face, you could see that that person had something to say, and we would bring them into the discussion. We would bring them out, we would encourage them to contribute. We were particularly conscious of women because of what we had gone through, that we had to encourage the women to come forward and not to be dominated by the men. I remember one performance that we did, and to be honest I can’t remember whether if it was Red Ladder or Broadside now, but it was a small venue and it was a small audience and this woman and her husband were sitting there in the front row. This man said something that she really took exception to, and it was her husband, and she – she literally got up, took her handbag out from under her seat and she (laughs) hit him (laughs). I don’t celebrate violence but she hit him on the top of the head with her handbag and just said she was outraged at what he had said, and she just screamed at him (laughter), and there was a sense in which, you know, you thought: well, I would love to be a fly on the wall on the way home (laughter). But our discussions changed people.  I remember on holiday in Portugal, I believe it was, we were camping next to someone who recognised us, I think it was the Red Ladder women’s play, and they came up to us and said, ‘Aren’t you those people from Red Ladder the theatre group’ or whatever, and we said yeah, yeah, and he said, ‘That play changed my life, it changed me and I had to think differently about my relationships to women and my life’, and it was sort of  ‘Thank you’. And our plays did that. I just take such exception to the idea that Red Ladder and Broadside as well – we may have been deeply political, we would certainly have called ourselves Marxist Communists, whatever, but we were never about trotting a line out, never, and if we had been we would not have had that kind of impact, that very deep personal impact on people. Wouldn’t have had it – we wouldn’t have lasted five minutes.’

Bibliography
Theatre as a Weapon, Workers’ Theatre in the Soviet Union, Germany & Britain, 1917-1934 by Richard Stourac and Kathleen McCreery (Routledge & Kegan Paul, 1986)
When I Meet My Mother in The Continuum and other plays ed. R. Kilalea,  Schools Edition (Harare, Zimbabwe: Weaver Press, 2009) and in Children’s Rights, ed. J.L. Fernando, J.L. The Annals of the American Academy of Political and Social Science. Vol. 575. (London & New Delhi: Sage Publications, inc.: Thousand Oaks, May 2001)
Strike While the Iron is Hot collectively devised, in Strike While the Iron is Hot: Sexual Politics in the Theatre ed. Michelene Wandor (Journeyman, 1980) and extracts in Trade Union Studies, a course for active trade unionists (British Broadcasting Corporation, 1975)
See here for details of other works and unpublished plays.