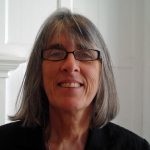 Born into a working class family in Ilford,  Mary Moore studied Theatre Design at Central School of Arts and won an Arts Council bursary competition for young designers. She went on to build an extensive career as a designer working at Lincoln Theatre Royal with Malcolm Griffiths, Worcester with Sam Walters, and at Canterbury. She then went to Stoke where work with Peter Cheeseman in theatre-in-the-round and on documentary plays was a major influence. Shows at the Mermaid Theatre, Soho Poly, Bush, Royal Court and Hampstead, among others, followed, before becoming Head of Design at Ipswich, along with a stint working with the alternative comedy troupe Low Moan Spectacular. She continued to design for mainstream theatres alongside working increasingly on alternative theatre shows including designing Gay Sweatshop’s first tour of Any Woman Can and Mister X in 1976, as well as Care and Control. She designed for the Women’s Project at New End in 1976 and the Women’s Festival at the Drill Hall in 1977. She also designed An Optimistic Thrust for Joint Stock (1980) and shows at the Drill Hall and Oval House. Meeting director Julie Holledge, she worked with her on designs for Soap Opera and My Mkinga with Women’s Theatre Group, for The Oracle,  Aurora Leigh and Rutherford and Son (1980), with Mrs Worthington’s Daughters and for Tap Dance on a Telephone Line at the Tricycle (1981). She moved with Julie to Australia in 1981 where she has continued her career as a designer in both alternative and mainstream contexts.

Better Books exhibition
‘There was an exhibition at Better Books [bookshop in Oxford Street] that was incredibly thrilling, you entered the exhibition – it was a series of installations –  you entered this exhibition by forcing yourself through a very narrow door made up of telephone directories, and you had to squeeze your way through this thing, and you thought, ‘Wow!’ when you got there, and there were these amazing images of, sort of death images really, people in cases, extraordinary.  And the only way out of this exhibition was to climb through tyres that were covered in down. You’d see people walking down Oxford Street with bits of fluffy down and you knew they’d been to this Better Books exhibition. It was great.’

The women of Gay Sweatshop

Bibliography:
‘A Pretty Effect at the Back of the Stage’ interview with Mary Moore and Di Seymour by Michelene Wandor (Platform, no 1)