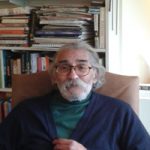 For related images see our Roy Kift and Roland Rees web pages.
Below are some extracts from Mustapha Matura’s interview – a full account of the topics covered in his interview can be accessed at Mustapha Matura Topic List page.

Mustapha: The audience, ironically, was mostly white – a white middle-class, curious audience who were aware that black theatre was different, and it had a different energy and it was saying different things; and that was one of the things that we pondered over, that, the effect we were getting. The place was packed with white audiences and we wanted more black people to come in because black people, black audiences brought a different energy with them, because they would engage with the play and argue with the play and shout and say, ‘No, it’s not like, that it’s da, da, da!’ and, ‘This is the way it should be!’. And you got a direct engagement with black audiences whereas a white audience would just sit back and try and be invisible; but the black people engaged, and we were always complaining that black people would rather stay at home and watch Coronation Street rather than come out and see how their lives…and when they did it was wonderful. This was a creation of a black whole theatre scene and we got black audiences and we’d get the young children who would come out, through curiosity or their friends would tell them about it, and then they would see it, like it and tell their mothers, and their mothers would tell the granny and the aunties and the uncles and you’d get this old generation coming. All because it was plays about their lives, and there was not, nothing like that on television, there was no black actors on television at that time, very scarce. Theatre was very scarce too but black plays, we built an audience and they came out…

Susan Croft: And did that start immediately then with the Black Pieces [Part of the Black Power season] and but then built through the various things afterwards?

Mustpha: Yes, that how it kind of grew, and Roland Rees, to give him the credit he deserves, he did a lot of black plays, and he had done a study of Marcus Garvey, so he was connected to the black scene and the black aspirations. It just grew in a wonderful way, without plans. I mean a lot of people – Oscar Abrahams from the Keskidee [Centre in Islington] – a lot of people were doing it out of sheer love. And once a year they’d have to beg for funding and funding was not guaranteed, but they pursued it and they were pioneers, these guys, and they were doing it for, just for pure love of theatre and to see it and be involved in the whole creative process.

Racial climate of the time