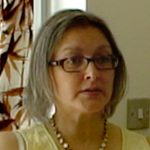 Adele Salem (formerly Saleem). Daughter of Abdul Razak, an Afghan father and Peggy Robinson, an English mother, Adele grew up in Leicester and studied acting at the Bristol Old Vic Theatre School in the late 70s. She joined Spare Tyre and then work for two and a half years with the Women’s Theatre Group on shows including Love and Dissent, Dear Girl, Double Vision and New Anatomies. She co-founded Hard Corps writing and performing in John and Les Autres, then making the solo piece The First Woman in Outer Space, before joining The Magdalena Project for Nominatae Filiae with Zofia Kalinska then performance art projects Face Down and The Empire with the Steve Shill Company. Adele currently runs the shop ‘Four and Twenty Blackbirds’ in Camden Passage and teaches Tai Chi and runs Shamanic Journey circles.

Taking on the men’s roles

‘That was the thing that we did, we wore dungarees. I remember having a khaki flying suit when I was in the Women’s Theatre Group. It was very much, ‘We can do what men can do, we can carry really heavy equipment, drive the really big Mercedes van,’ anything, and it was a point of honour. It was a point of honour to us to be seen by the young girls, when we went into the schools, carrying the equipment, setting up audio equipment, all that sort of stuff, electric guitars, stuff like that, saying, ‘Yeah we can do this too. You can do this too. Look we’re doing it.’ So that was very radical, very exciting, and very tiring lugging all that stuff around.’

Writings on:
Putting Your Daughters on the Stage: Lesbian Theatre from the 1970s to the 1990s by Sandra Freeman (Cassell, 1997)