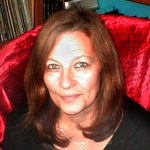 Hilary Westlake was born in Plymouth, daughter of a naval officer and educated at convents and grammar schools. She trained for the theatre at E.15 Acting School and performed with several avant garde companies including Inter-Action‘s TOC and London La Mama before forming Lumiere & Son Theatre Company with writer, David Gale. The company, funded by the Arts Council, produced over fifty original shows for theatres, shopping centres, ferry boats, botanical gardens, castles and swimming pools. The shows used text and music together with strong visual and choreographic elements. Initially, most of Lumiere & Son’s shows were written by David and directed by Hilary, but latterly, she was responsible for the concept as well as the direction of the pieces. Hilary directs existing texts, operas and cabaret and creates large-scale site-specific performances. She has gone on to work all over Europe, Australia and parts of Asia, directing shows and running seminars and workshops for performers, designers, writers and directors. She has worked as a creative consultant on films, corporate presentations and live performances and from 2003 to early 2006 was the Creative Director of Entertainment at Disneyland Resort Paris. She continues to direct and advise on large-scale theatre projects.

‘Dave [Gale] came from Cambridge – he was at Cambridge, but he also came from Cambridge, and he knew the Pink Floyd and he contacted one of them, Roger Waters, to see if he‘d like to give us some money to get us started. So he did –   I think he gave us £1,500 which was a bit of a whack in those days! So we started off paying wages – we’ve never not paid wages – not much, not Equity minimum or anything but we paid wages and the first show we had was at a Henry Cow concert at the Rainbow Theatre. We did this show… and Dave wanted to do something with sheep’s heads and so we got all these sheep’s heads from the butchers and we boiled them and they were foul-smelling and we put them in boxes. And we’d been auditioning for members and we had a load of people that we’d auditioned, so about 15 of us including Rose English who was on stilts, and we did this sort of, I suppose what you’d call a happening – it was a bit of kabuki, a bit of martial arts. It was just everything’

Working with Inter-Action and Naftali Yavin

Bibliography:
Slips (1981) by David Gale in Walks on Water ed. and introduced by Deborah Levy (Methuen, 1992)