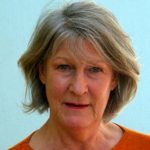 Lily Susan Todd trained as the ATV Repertory Theatre Trainee Director Scheme and at the RSC. After directing many productions in rep, she became active in feminist theatre through the Women’s Street Theatre Group, then as collective member of Monstrous Regiment, directing with them: Claire Luckham’s ‘s Scum: Death, Destruction and Dirty Washing, Bryony Lavery‘s Time Gentlemen Please, Kiss and Kill, (which she co-wrote with Ann Mitchell) and co-writing Teendreams with David Edgar. Her many productions since range from Tosca for Dublin Opera to two English premieres of Marguerite Duras’ work, to running  flagship repertory seasons of contemporary classics with Annie Castledine at Derby Playhouse. A committed teacher of acting, she has trained actors at Trinity College Dublin, Central School of Speech and Drama, RADA and other schools. She produced the event Remembering Buzz in 2005, to mark the 30th anniversary of the death of the remarkable director Buzz Goodbody with whom she was at Sussex University. She continues to teach and direct and is now also writing for the theatre.

More images can be found on the Monstrous Regiment web page.

‘Through my father, who was an extremely passionate amateur, I was drawn into the world of theatre, and a lot of what drew me to it was, that it was  absolutely the opposite of the rather drab, domestic circumstances in which we were living. We had no money and we were living in a council house. It was in that period at the end of the war, you know, that decade, 1945-1955, and in that time things were really very grey, and my parents, particularly my mother, were these really kind of exhausted people. Nevertheless my father expended this huge energy on rushing out and doing plays up to three nights a week and Saturdays and Sundays, and after a short while, I got hoiked along with him and my most vivid sort of association is going into this sort of barn-like place which was a very tumbledown kind of warehouse in which the Reading Rep rehearsed and also built sets, and it was like opening a door into a completely magic room because once you went inside, there were the colours of the paint and great flats being painted. It stayed with me and I’ve always come back to theatre. So theatre long predates feminism in my life, and it’s a passion that I’ve just had to accept.’

Women finding their identity and voice through creativity

Women’s Street Theatre Group event at the Festival of Light