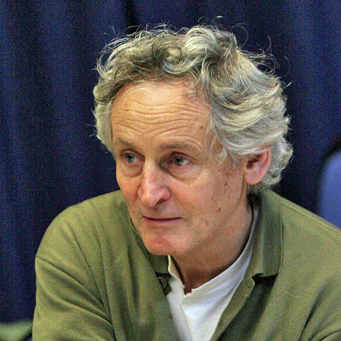 Max Stafford-Clark studied at Trinity College , Dublin where he began directing theatre. He became an associate director of the Traverse Theatre in Edinburgh in 1966 and two years later the Artistic Director of the company. In 1970 he moved to run the Traverse Theatre Workshop Company, designed to create a space to explore approaches to new writing through more open-ended developmental methods. He developed this approach further with Joint Stock, the theatre collective he set up with David Aukin in 1974, pioneering an approach where the company explored a theme through workshops, on the basis of which the playwright then wrote an initial script, which was further developed in rehearsal. The company’s method became key in the development of the work of Caryl Churchill (Cloud Nine, Light Shining in Buckinghamshire) as well as work by Howard Brenton (Epsom Downs), David Hare (Fanshen), Stephen Lowe (The Ragged Trousered Philanthropists) and many others. Key productions included He took his emphasis on nurturing new writing into the Royal Court, as Artistic Director from 1979 to 1993, commissioning Churchill’s classic Top Girls, along with Timberlake Wertenbaker’s Our Country’ Good, Howard Barker’s Victory, new work by Andrea Dunbar, Jim Cartwright, Hanif Kureishi, Sarah Daniels and especially many young, Black and women writers. On leaving the Royal Court he established another new writing company, Out of Joint, continuing to encourage new writing including seminal work based on verbatim testimony.

Dublin Fair at the Traverse in Edinburgh and London

‘ I was on a rugby tour of Edinburgh, and Trinity played against Edinburgh University, Edinburgh Academicals and Edinburgh Wanderers. Rather than booze all night drinking endless pints of beer at which I wasn’t very good, I slipped off to the Traverse which I’d heard about, and met not Jim Haynes, who was running it, but Ricky de Marco. And they were stuffing envelopes for some kind of mail-out, so I got down and helped, and made contacts then. And that summer when I was directing the Trinity Revue I got in touch with Jim Haynes and said can I bring it over. So he let me bring it over as a late night show. It was called Dublin Fair. It was done first of all as a late night thing at the Traverse. But it was very successful so we were invited back for the Festival. It just happened that that year both the Oxford and the Cambridge revues were rather poor, so we got an extremely good revue in The Observer… It was a collection of sketches, in that sense it was like Beyond the Fringe. There were a couple of very good writers. It was a pastiche of various different things. I suppose being predominantly Irish it had a slightly different cultural voice in the context of the  Edinburgh Festival. However after the triumph of the late night at the Traverse and then in the Festival, which was an hour long, we – the Traverse had a season at the Jeanetta Cochrane at the Arts Theatre, and we were asked to be part of that, but of course we had to expand the show then from one hour to two hours, so all the material that we had earlier and rather wisely cut was restored. I was absolutely out of my depth trying to direct it… The Jeanetta Cochrane was leased for a season by the Traverse. The plays just weren’t that terrific I think. But you see in Edinburgh the Traverse  was sustained by new work by Stan Eveling and CP Taylor, but also by productions of Ionseco and so on, which in an Edinburgh context were absolutely new, rather less so in London. So Dublin Fair comes to Edinburgh, does well, has good revues, transfers to London and dies a death.’

The influence of  Bill Gaskill

Archive:
Max Stafford-Clark’s papers are in the British Library
The Out of Joint archive is at the University of Hull